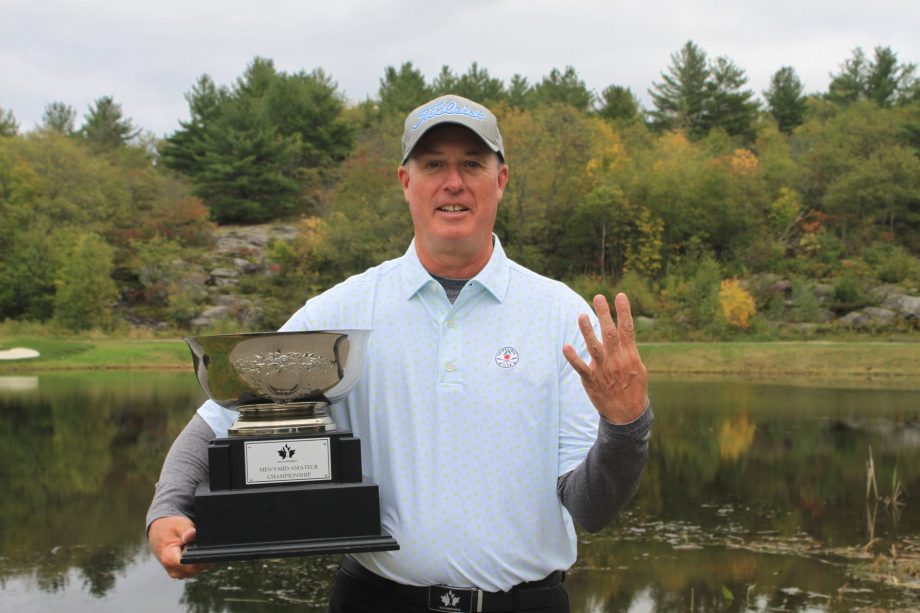 Gravenhurst, ON – Even colder conditions greeted competitors for the final round of the 2021 Ontario Men’s Mid-Amateur Championship, at the gorgeous Taboo Muskoka. The temperature may not have risen, but the competition absolutely did, as we would see a champion crowned only after playoff holes.

Walking away after two extra holes, is now four-time winner of the Ontario Men’s Mid-Amateur, Dave Bunker (Cherry Hill Club), with a solid even par on the final day (71). Jonn Drewery (Westmount G&CC) shot a two-over (73), and would eventually miss a difficult par putt save on the second extra hole to secure the win to Bunker. The bronze medal was won by our 36-hole leader Brett Mitchell (Galt Country Club), after shooting a four-over (75). Round of the day belonged to Robert McCraken, who fired a brilliant four-under (67) to climb the leaderboard into fourth place.

Bunker, who also claims the Mid-Master category (40+) with the win, expressed great pleasure in his play. “I played well today, with only one hole mistake. It’s nice to win something, as I’ve played well the last month and a half, with the worst I’ve finished was top four.”  Describing his steady play on a challenging course while guys stumbled around him, Bunker noted “I know it’s a difficult course and anything can happen, if you keep going and not lose your focus an even par or one-under can win it”.

Bunked thanked his wife most importantly for her patience and understanding as he’s had a very busy past five weeks. “She’s been very patient with me, it’ll be nice to be home for a while and she’s coming with me to California for my future golf in two weeks”.

Golf Ontario would like to thank the players, rules officials, staff and members for their support of the 2021 Ontario Men’s Mid-Am Championship. To Taboo Muskoka and your team, thank you sincerely for being such amazing hosts and welcoming us for another championship this season.

For more information on the championship and to follow the leaderboard, click here to view our Golf Genius tournament page.