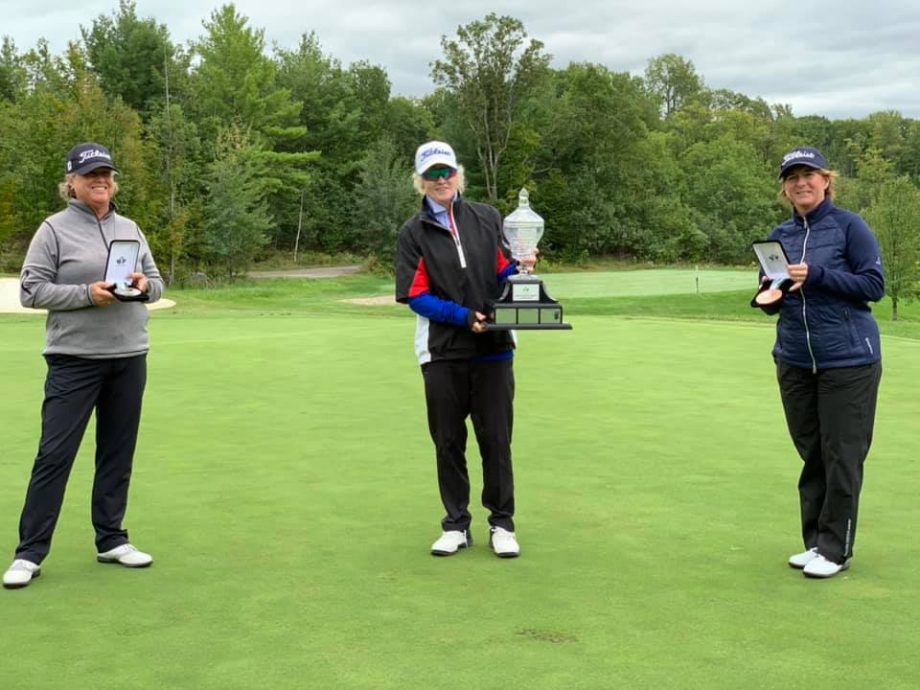 Gravenhurst, ON – Overcast conditions continued into the final round of the 2020 Ontario Senior Men’s and Women’s Championship, presented by Durham Artificial Grass, at the elegant Taboo Muskoka Resort and Golf. The dew covered course had dried up a bit from previous days of rain, giving players a new challenge as the greens began to roll quicker, leaving little to no room for error.

Taking home his first Ontario Senior Men’s Championship title, Dave Bunker (Cherry Hill Club) completed the final round two strokes ahead of silver medalist Ashley Chinner (Coppinwood). Sitting in second place after round two, Bunker managed to shoot a solid one-over par round that included three birdies, putting him atop the final leaderboard at three-over par (216) on the championship. Already a three-time winner of the Ontario Men’s Mid-Amateur Championships, Bunker adds another title to his belt following his first Senior Men’s Championship win. Taking home the silver medal after leading after both the first and second round, Chinner had a difficult final round leaving him at five-over par for the Championship (218). Bronze medalist, Tom Henderson (Public Player), had a consistent championship with totals of 73, 76, and 73 (221).

Reflecting on the win, Bunker said “to be a rookie in this event and play well enough to beat a lot of really good players that were here, it feels good. I haven’t won an event in a few years, so it’s great to play well enough to compete with these players”. In the final round, Bunker knew he’d have to step up his game against competitor and friend Ashley Chinner, however “he struggled today which kind of opened the door for me. I didn’t play as well as I would’ve liked, but from looking at the scores it seems like a lot of players struggled today. I’m happy to finish on top even though it wasn’t exactly the way it was supposed to go, but it was nice to take the win”. Watch for Dave Bunker as he competes for another title at the Ontario Men’s Mid-Amateur Championship September 22nd to 24th.

Having a fantastic season after recently finishing second-place in the Ontario Women’s Mid-Amateur Championship, Terrill Samuel (Weston G&CC) takes home her second Ontario Senior Women’s Championship title. Playing her lowest round of the championship (70) on the final day, Samuel posted the low round of the day to finish 6 strokes ahead of the silver medalist, to leave her at four-over for the week (217). Rounding out a star studded top 3  were five-time champion Mary Ann Hayward, who finished at ten-over par to take home the silver medal (223), while three-time champion Judith Kyrinis (Granite GC) takes home the bronze medal (225).

All smiles and thrilled to add another title to her belt, Samuel had a few words of appreciation to say during the awards ceremony. “Thank you Nigel Hollidge for stepping up to the plate and hosting the championship at Taboo Muskoka, as I know we were originally set to compete at Deerhurst Highlands Golf Course. To Golf Ontario, we can’t do this without you, so thank you very much! You don’t know how much fun we get to have all because you volunteer and come up and work long hours here. It’s fabulous and I can’t thank you enough. To my fellow competitors, thank you for the great competition. We got two championships in this year, some of you maybe only one, but that’s what’s fun about it because I get to come and play with all of you, so thank you for coming out. The course was great given the circumstances and we had a great time this week”.

Golf Ontario would like to thank the players, staff, and volunteers for their support of the Ontario Senior Men’s and Women’s Championship. To the beautiful Taboo Muskoka Resort and Golf, Managing Director Nigel Hollidge, Director of Operations Lori Reynolds, and Superintendent Ryan Kerr, thank you for being gracious hosts on such a well-conditioned course. A big thank you to the officials and volunteers, as you are extremely valuable and we appreciate the time you take out of your week to assist. Lastly, a huge thank you to our sponsors and partners, Adidas, Taylor Made, Modern Golf, Dormie Workshop, Durham Artificial Grass, Humber College, Barcelo Bavaro Grand Resort, Baka Mobile, and Play Golf Myrtle Beach. We are grateful for your continued support.