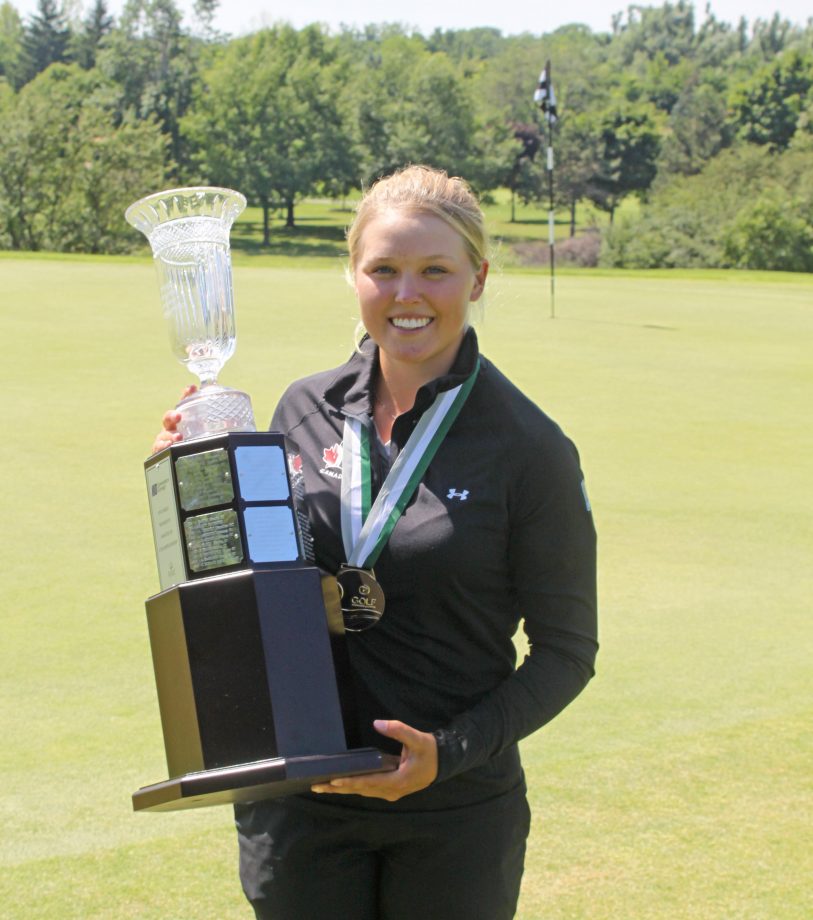 BRAMPTON— There is only one way to describe Smiths Falls resident Brooke Henderson’s performance at the Golf Association of Ontario’s (GAO) Investors Group Women’s Amateur Championship, at the Brampton Golf Club: clutch. The 16-year-old went wire-to-wire leading after all four rounds to capture the 2014 title with a combined score of 12-under (272).

The day began with a birdie for the 21-year-old James on the first hole and a bogey for Henderson on the third. That brought the two back to a share of the lead at seven-under. However, that would be the sole blemish on Henderson’s day. She completed the front nine with birdies on four, seven and nine. She then hit back-to-back birdies on 13 and 14 to finish the round at four-under (67).

As for James, she hit another birdie on the fifth hole but a bogey on the sixth brought her back to seven under. She began the back nine with a birdie and a bogey, on 10 and 11, before closing out her round with birdies on 14 and 17. She finished the day three-under (68) and the tournament at nine-under.

The 22-year-old Marchand looked to jump into the race for the title with a three-under front nine, thanks to birdies on the second, eighth and ninth holes. She would bogey 12, but added birdies on 13 and 15 to finish the day four-under (67) and six-under for the tournament.

After the round, Henderson spoke about what it meant to win the championship. “It was such a great event! I had a good opening round and was able to finish it off today.  Coming into the tournament, I wanted to get my name on that trophy. There are so many great names on it and I am so happy I was able to do it.”

The three Team Canada members spent most of the week playing together, Henderson talked about how that impacted her game. “I played with Britt (Marchand) right from the get go and then with Gus (James) for the last two rounds. I had a couple of middle rounds that weren’t that great but playing with them was a lot of fun. They are a couple of great players. With them knowing how to win and being on the national team with them, I knew I needed to have four solid rounds to finish it off.”

Henderson was very consistent throughout the rounds and chalked that up to her ball striking. “My ball striking was really huge. On the first day I had five or six shots where I was inside five feet putting for birdie, which is a huge confidence booster. It really helped me save energy that I needed to win today.”

The win is just the latest in a series of strong finishes for Henderson, but is sure to help keep her momentum going. “I’ve been on a bit of a roll as of late with winning the Porter Cup, then I finished tenth at the U.S. Open, then won the Canadian Tour event in Niagara Falls and now the Ontario Amateur. It really has been a great last couple of weeks and I have enjoyed it.”

With their top three finishes, the trio of Henderson, James and Marchand will go on to represent Ontario in the inter-provincial competition at the Canadian Women’s Amateur, July 22-25 at Craigowan Golf & Country Club in Woodstock.

For full tournament info visit the tournament site at: http://gao.bluegolf.com/bluegolf/gao14/event/gao1416/index.htm