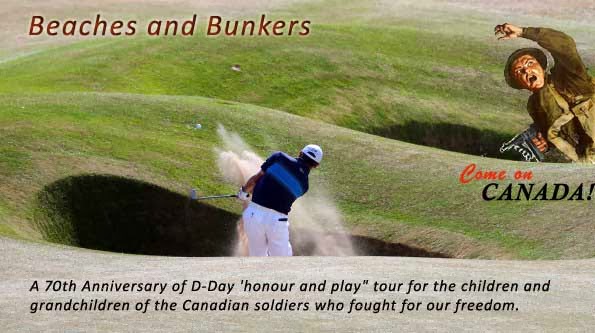 If you are looking for a different kind of getaway this June, one that combines your love of history along with passion for golf, Robb Lucy has the answer with Beaches and Bunkers.

Beaches and Bunkers is a trip of a lifetime created in honour of the 70th anniversary of D-Day for the descendants of soldiers who took part in the storming of the beaches of Normandy, along with history and golf enthusiasts. The nine-day tour, from June 8-17, will visit historical sites in France, Belgium and Holland, but also has a golfing aspect that will allow the participants to play four different courses along the tour.

Lucy came up with the idea for the tour in part thanks to his father Bob who was among the soldiers that landed on the beaches as a gunner in 1944. A scratch golfer, Bob carried with him a lucky 3-iron, hitting rocks, twigs and lumps of dirt to ease the stress of war during his tour.

For the 50th anniversary, Lucy and his father went back and followed the footsteps Bob had walked during his original tour. It inspired Bob to turn his stories into a book, Ubique-A Gunner’s Story. For Lucy, the experience made him want to do something else for others to see the history behind the event. Bob passed away four years ago, but it didn’t prevent Lucy, a passionate golfer himself, from trying to come up with the idea for a trip.  After attending a service on November 11, at the Cenotaph in Vancouver, Lucy began chatting with a friend about the idea. They wondered what they could add to make the trip more fun and that’s when it hit him to include golf stops along the way.

“I’m pleased to see so many of us at our local cenotaphs each November 11, but saddened so few really understand what happened 70 years ago,” says Lucy. “I hope this tour will be an admonition for people not to let the stories of their parents and grandparents disappear. These experiences forged their tools for life. And it is with those tools they raised us.”

The tour is open to singles, couples and foursomes and will visit key locations of the ‘39-’45 war, as well as Vimy, as the group travels from Paris to Dieppe, Normandy, Belgium and finally to Holland and Amsterdam.  The four golf courses that have been included are: Golf Omaha Beach in Normandy, that overlooks the beaches that were stormed, Golf Club Toxandria, De Hoge Dijk and Spaarnwoude all in Holland.

Guiding the tour is Canadian military historian Terry Copp. Copp is a long-serving professor at Wilfrid Laurier University and the founder of the Laurier Centre for Military Strategic and Disarmament Studies. He is the leading scholar of Canada’s military role in World War II.

Lucy connected with Copp before the trip with his father 20 years ago. He knew he would be the perfect guide for this tour.  “I knew we needed the best guy and Terry’s it. We talked a few times and Terry said ‘he’d love to’. With him on-board, we were a go.”

For those interested, more information about the trip is available at www.beachesandbunkers.ca.