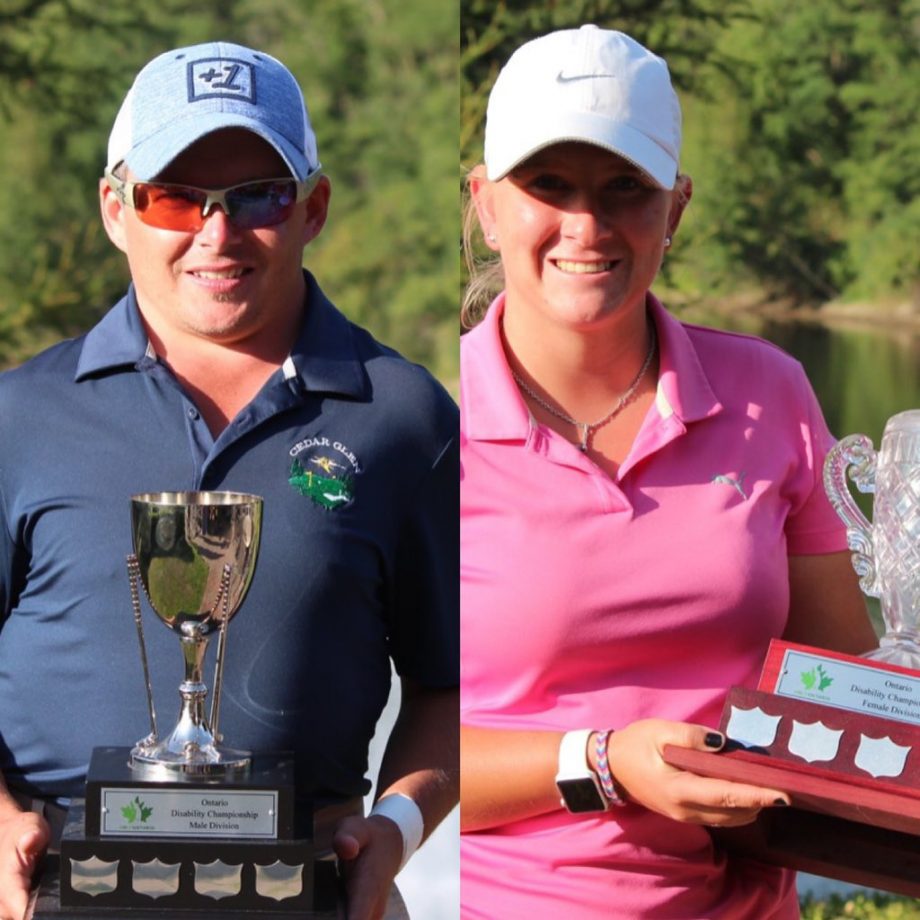 Tottenham, ON — Another beautiful sunny day welcomed the players as they took to Woodington Lake GC for the second and final round of the Inaugural Ontario Disability Championship. The first day was not only a great time, but also quite the competitive showing, and the second round proved to be just the same. The leaders took to the track to see if they could pull ahead of the rest of the field, and become the first Ontario Disability champion.

After 18, it was Kurtis Barkley (Cedar Glen GC) who came out on top in the men’s side of the category. Trailing Tracy Ramin (Montrose, MI) coming into today’s round, Barkley kicked his round off with two birdies on his first five holes to immediately take the lead early on.

It was from there on out that both Barkley and Ramin would go on a back and forth battle for the remainder of the round. With some steady play, Barkley was able to take the edge after 12, and held the lead the rest of the way through.

Barkley tapped in a short putt on 18, followed shortly by a thunderous cheer from the crowd that circled the green. He would finish the tournament with a total score of +5, and would be crowned the first ever Ontario Disability Men’s champion.

“Today was a grind, but I made a few key putts to keep myself in it,” said Barkley. “Ramin’s a great competitor, so it’s definitely a success to be able to come out on top.” When asked what it feels like to win, he couldn’t help but smile.

As for Ramin, the Michigan resident impressed throughout the entire tournament being the leader after the first round. Keeping it a tight race during the final stretch, Ramin proved that it wasn’t only his skill that catapulted him to the top of the leaderboard, but his resilience as well. He would finish the tournament with a total score of +13.

In third was Johannes Grames (Vancouver, BC), with a score of +24. Grames had an impressive showing, proving his ability to fly high with the leaders.

For the women’s overall portion of the tournament, it was Natasha Stasiuk (Heron Point) who came out on top. Stasiuk came out on fire in the first round of the tournament and it didn’t stop there. Carding 6 pars in the first 10 holes, the Oakville resident came out again in the second round proving she belonged at the top of the leaderboard. Despite the tough competition from her nearest competitors, Stasiuk maintained composure over the course of the two days, and with some hot play to complement her demeanor, she was able to crown herself a champion.

Stasiuk finished the tournament the first ever Ontario Disability Women’s champion with a score of +16 overall.

Trailing in second was Elina Pylkkanen (Espoo, Finland). Pylkkanen came all the way to Canada to showcase her skillset and showcase she did. With multiple pars on the challenging course, Pylkkanen played a calm and steady game over the course of the tournament. She would finish with a total score of +48.

In third was Tessa Trojan (Glen Abbey GC) with a score of +53. Trailing closely behind Pylkkanen, the two battled it out the entire second round for the second place title. Although it was Pylkkanen who would ultimately come out ahead, Trojan’s efforts were not overseen as she battled the entire way through.

Stasiuk would also go on to win the Women’s Net portion of the championship, while Bill Booker (Sutton Creek GC) would win the Men’s Net.

The Inaugural Ontario Disability Championship was one for the books, and with so many smiling faces and laughs around the course, it is safe to say that it was a success from all aspects.

“As a physiotherapist I continuously notice the importance of golf in the rehabilitation process for people with disabilities,” said Mark Smith, an EDGA Eligibility Assessor. “It was amazing to watch such skilled players come out and not only perform at such a high standard, but to also enjoy themselves.”

We look forward to hosting this tournament again next year, with hopefully an even bigger field.

Golf Ontario is Ontario’s Provincial Sport Organization focused on enhancing participation, elevating performance and supporting the passion of golfers in Ontario. With over 100,000 individual members and 450 member clubs, Golf Ontario is one of the largest golf associations in the world.  From rating courses and keeping the rules of the game intact, to growing the game at the grassroots level and hosting the best amateur tournaments in Canada, Golf Ontario is a passionate group dedicated to shaping lives through Golf.

About the Ontario Disability Championship

This event will showcase some of Ontario’s top athletes with disabilities in a provincial championship environment. Focusing on player development, this inclusive event will ensure a proper pathway and better competition opportunity for some of the highest performing athletes with disabilities. This event will be included in the list of events eligible for world ranking points and will see both men and women compete in both low gross and low net categories.

Woodington Lake Golf Club is home to 36 holes of picturesque golf in Tottenham, Ontario, just north of Toronto. The original course, The Legend Course, opened in 1995 and is built on over 200 acres of rolling terrain. Carved from towering pine forest and nestle around Woodington Lake, this course Is truly legendary. The newest addition to Woodington Lake Golf Club is the Legacy course, a true mix of Links and Stadium styles. With very challenging water hazards, along with fast and undulating greens, the Legacy course will keep golfers of every skill coming back for more.