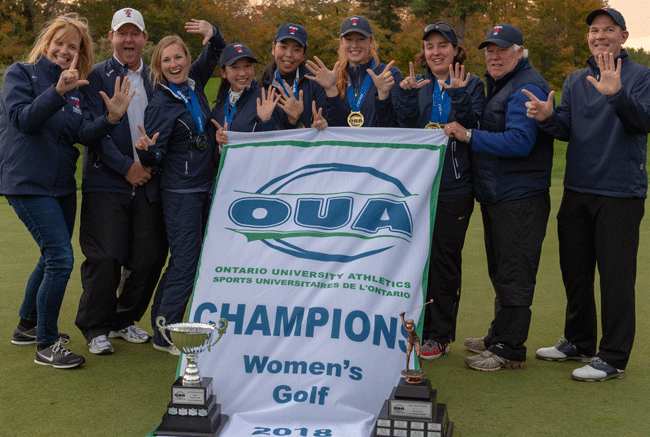 Alberton, Ont. – One side of the competition at Heron Point Golf Links saw a familiar champion return to the top of the podium at the head of a dynastic team, while the other found a fight to the finish and an upstart team champion.

Their win marked the Blues eighth championship since the establishment of the OUA women’s golf tournament in 2005.

For her part, Upeniek added another chapter to a storied varsity golf career, with a third career title and, amazingly, a 10th appearance among the OUA all-stars.

While the Blues were busily building on their dynasty, the Ottawa Gee-Gees men successfully held off the challenge of the Western Mustangs to preserve their own lead after Day 1 and snag their first Ruttan Trophy since 2009 and seventh in its 95-year history. Although his team was made to settle for silver, Mustang Mackenzie Carter overturned a two-stroke deficit after Day 1 to catch Brock’s Adam Graham and claim the Len Shore Trophy as the men’s individual champion, after shooting an impressive two-over par in challenging conditions of heavy wind at Heron Point Tuesday.

The top two in the women’s field battled to a dead heat through two rounds, with Upenieks grabbing a one-stroke lead over Guelph’s Sarah Dunning on Day 1 and the two posting matching rounds of 12-over 82 on the deciding day to preserve the Blue’s slim pole position.

Finishing two strokes back of Dunning, Windsor’s Melanie Burgess raced up the leaderboard to jump from a tie for seventh after Day 1 to the bronze medal position, posting a Day 2-best round of 10-over 80.

Upenieks was backed up by teammates and fellow First Team All-Stars Ellice Hong, who finished fourth at a combined 24-over, and Kelsey Fuchs, who finished in a tie for fifth at 28-over.

14 shots off the combined pace of the Blues, the Queen’s Gaels claimed silver thanks to the scores of First Team All-Stars Jasmine Mussani and Robyn Campbell, who finished in that fifth-place tie alongside Fuchs, and the 19th-placed Melissa Ramnauth.

Burgess’ inspired round on Day 2 helped the Lancers to team bronze, with Second Team All-Star Tavia Maurovic providing Windsor’s second score at 33-over and Nicole Cesca completing the scoring at 39-over.

Winning the team title by just two strokes, Ottawa was led by an individual bronze-medal-winning performance from Anthony Brodeur, who posted a two-day total of 10-over.

Teammates and Second Team All-Stars Nicholas Workun and Michael Reaume posted identical totals of 13-over to tie for eighth, while Jared Coyle completed the scoring for the Gee-Gees at 16-over.

Agonizingly close to repeating as team champions, particularly given Carter’s performance, the Mustangs saw Jackson Bowery claimed OUA Second Team All-Star status amidst the tie for eighth at 13-over, while defending individual champion Charles Fitzsimmons scored third for Western at 14-over. But the team was ultimately undone by the lack of a strong final score, as Joseph Burgess provided it at 27-over.

A top two of Second Team All-Stars Henry Luel and Andrew Cox, who finished in ties for sixth and eighth at 12 and 13-over respectively, helped Laurier vault into the bronze medal position, while Ryan Murphy and Jaron Brown completed the Golden Hawks scoring with matching tallies of 19-over.