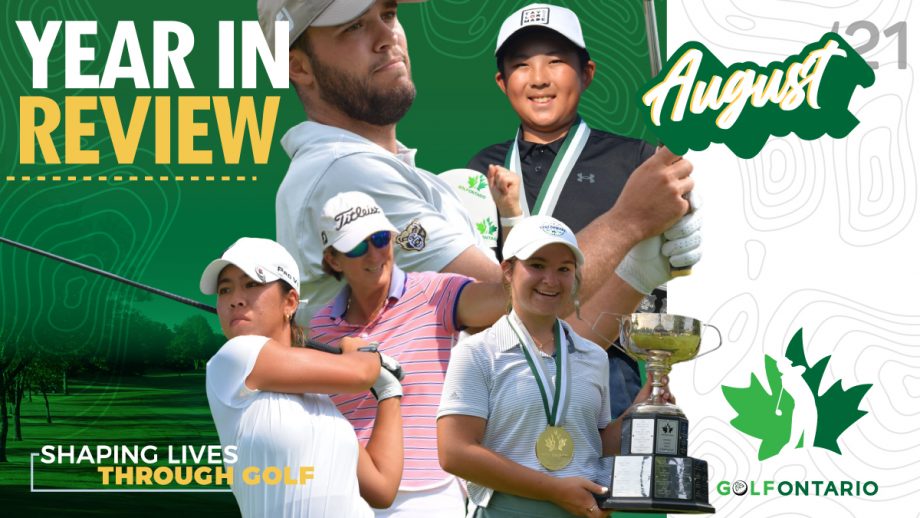 The Ontario Senior Women’s Championship, presented by Durham Artificial Grass from Spring Lakes Golf Club (North Course), was played under pristine conditions. The temperature quickly rose and so did the play of leader Judith Kyrinis, who claimed the 2021 title by a whopping 14 strokes.

The now four-time Ontario Senior Women’s Champion, Kyrinis (The Thornhill Club), fired a tournament best 4-under (67) including 4 birdies and no bogeys. 2020 Champion Terrill Samuel (Weston G&CC) finished second after a 3-over (74) to claim silver, while third was taken by Marion Reid (Islington GC) with a 7-over (78).

Players battled warm temperatures to be crowned the 2021 Ontario Junior (U19) Girls’ Champion from Brockville Country Club. Following round three, the leaderboard was tight with just eleven girls sitting within a ten-stroke difference. In the final round, the leader groups pulled away from the pack to present a true champion.

Firing her lowest round and the only under-par score of the tournament was the newly crowned Ontario Junior Girls’ Champion, Peyton Costabile (Whistle Bear). Costabile defeated the challenging Stanley Thompson design, to finish the championship with a one-under round and 296 total. Claiming the silver medal three-strokes back was Vanessa Borovilos (Weston G&CC), after a round of 76. The bronze medalist, Chaewon Baek (BC Public Player), would fire a total thirteen-over on the championship.

Following an eventful 54-holes of golf over the course of four days, the crown was passed down and the 99th Ontario Men’s Amateur Championship has been awarded to Thomas Giroux. The championship hosted by Beach Grove Golf and Country Club experienced water accumulation during round two, causing the tournament to be shortened to a 54-hole championship.

After a tie in regular play in pursuit of the title, Nicholas Hofland (Hamilton G&CC) and Thomas Giroux (The Club at North Halton) endured a sudden-death playoff on eighteen. Both eight-under following the final round, Hofland and Giroux would head back to the tips, with Giroux coming out as the victor. Hofland would claim the silver medal after a low round of 66 and a total score of 205. The bronze medalist, Cam Kellett (St. Thomas G&CC), would fire a total six-under on the championship to leave him three strokes off Giroux.

Shooting a low round of 69 and a total of 280 on the championship to complete the 72-holes of competitive play, Jasmine Ly (Public Player) emerged as the newly crowned 106th Ontario Women’s Amateur Champion. The Windsor native is a 2018 Ontario Junior (U19) Girls Champion, 2019 Ontario Junior Girls’ Spring Classic Champion, plays NCAA golf at the Northern Illinois University, and qualified for the second consecutive year for the U.S. Women’s Amateur.

In second place position taking home the silver medal is Monet Chun (Summit G&CC), who had a stellar round of eight birdies to grant her the honour of a new Pointe West course record of 64. Chun is a sophomore at the University of Michigan and is only the second athlete on the women’s golf team to earn conference honours, which hasn’t been accomplished in 25 years. The bronze medalist position was earned by former Team Ontario teammates, Nicole Gal (Oakville GC) and Bo Brown (Blue Springs GC). Gal is a Team Canada National Junior Squad member and is the 66th Canadian Junior Girls Champion. Brown will be attending the University of British Columbia on a scholarship this fall, to pursue a Bachelor of Kinesiology and play on the Thunderbirds Women’s Golf team.

Firing a 75 to leave her two strokes ahead, Samuel secures her fourth Ontario Women’s Mid-Amateur Championship. Having won the title in 1991, 2000, and 2010, Samuel also holds the 1991 and 2004 Women’s Amateur and 2011 and 2020 Senior Women’s Championship titles. In second place with the silver medal after her lowest round of the championship, is 2021 Ontario Senior Women’s Champion, Judith Kyrinis (The Thornhill Club). Defending champion, Nonie Marler (Marine Drive GC), tried to make a run for the title as well with a low round of 74 to leave her in the bronze medalist position.

About the Ontario Women’s Mid-Amateur Championship

The competition was hot in the final round of the Team Goran Ontario Juvenile (U17) and Bantam (U15) Boys’ and Girls’ Championship, presented by St. Clair College. Four champions were crowned at Roseland Golf and Curling Club, as players battled a tight leaderboard in the race to claim the Juvenile and Bantam titles.

Maintaining the lead through the entire championship, Joline Truong (Trafalgar G&CC) completed the tournament with a seven-under to take home the 2021 Ontario Juvenile (U17) Girls’ Championship title. With low rounds of 68, 71, and 70 for an excellent three-day total of 209, Truong’s name will join the Sandra Post trophy with past winners Alena Sharp, Lindsay Knowlton, Rebecca Lee-Bentham, and Grace St-Germain. Silver medalist, Lindsay McGrath (Rattlesnake Point GC), finished four-under after shooting the girls’ low round of the day with a stellar 66. Carlee Meilleur (Loyalist G&CC) and Emma Hansen (Blue Springs GC) will take home the bronze medal with a tournament total of 219.

Team Ontario athlete, Owen Kim (Blue Springs GC), secured the 2021 Ontario Juvenile (U17) Boys’ Championship title after a lights-out 65 round and a total of thirteen-under (203). Kim will join the likes of Gary Cowan and Johnny Travale inscribed on the Mike Weir trophy. Taking home the silver medal was Isaiah Ellis (Lookout Point CC), who shot his lowest round of the championship with a 68, to give him a grand total of 209. An abundance of T3 players finished in the bronze medalist position, with a total of 212. The five players winning bronze were Jordan Hwang (Emerald Hills G&CC), Zachary Smith (Brampton GC), Isaiah Ibit (Greyhawk GC), Matthew Javier (Scarboro G&CC), and Luke Smith (The Thornhill Club).

For the Ontario Bantam (U15) Girls’ Championship, Lindsay McGrath (Rattlesnake Point GC) was awarded the 2021 title after her best championship round of golf to date. After round two, McGrath found herself in a tie for first with Carlee Meilleur (Loyalist G&CC), who would take home the silver medal seven-strokes behind. The bronze medalist went to Alex Ouellet, who held close to second-place, finishing just two-strokes back.

Holding off the pack with rounds of 69 and 67, Liu maintained the lead to claim the Peewee (U13) Girls’ title. Liu’s two-stroke lead in the final round gave her a championship total of six-under (136), following ten birdies over the two days of competition. Taking home silver medals in a tie for second at four-under was Alexis Card (Galt Country Club) and Celina Yeo (Public Player). The 2021 Drive, Chip and Putt Champion, Alexis Card, shot a whopping seven birdies in today’s round to give her the low round of the championship at 65. Yeo also had an excellent round, firing her lowest round of 67.

Over on the Peewee (U13) Boys’ side, Dai held strong to claim the crown with a five-under total. Dai’s two-stroke lead came from rounds of 70 and 67, for a low championship total of 137. Runner-up to claim the silver medal, was Manav Bharani (Brampton GC Ltd.), who shot an excellent 66 to end his championship with three-under. Vasili Gianakas (The National GC of Canada) came out of the four-way tie for third in yesterday’s round, to secure the bronze medallist position with a total of 141 over 36-holes.

The Ontario Peewee (U13) Championship made its debut in 2015. The tournament is open to boys and girls’ who are 12 and under on August 1st.