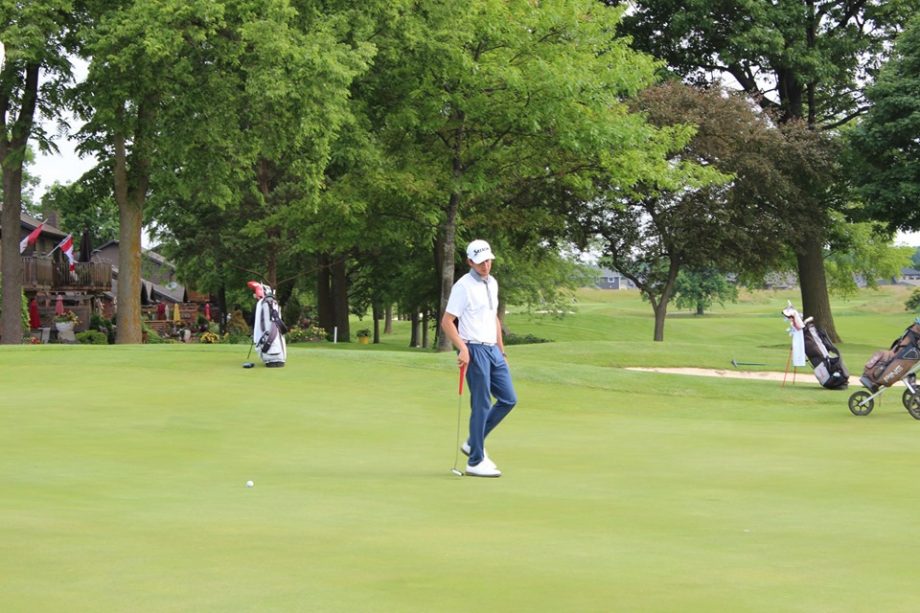 Amherstburg, ON — On a warm and sunny day, 144 players took to the course to kick off the 27th annual Men’s Mid-Am Championship at Pointe West Golf Club.

The first round started off strong, with Doug Hoppe (Essex G&CC) and Ashley Chinner (Coppinwood) kicking things off with impressive drives down the fairway. The rest of the players followed suit throughout the day, leading to a very competitive field. At the end of the day, there were 12 players who broke par on the par 72 track, and all 12 of those players were within 4 shots of the leader.

After 18 holes it was Philip Arci (King’s Riding GC) who led the way throughout the round. Starting off with three birdies and a par on the first four holes, Arci kept his momentum and rode his lead the rest of the way. Never bogeying once, Arci had the most consistent round out of the rest of the leaders. Using his 3 wood for nearly every drive, Arci said he was focused on location more than distance.

“I tried to keep it simple and play the ball down the middle,” said Arci. “There were a couple of downhill putts, so I just made sure to watch my speed throughout the round.”

Arci holds the top spot going into the second round tomorrow, and he plans to carry on his momentum from the first day. “I’m just going to do the same thing tomorrow. Centre green, make some putts, and be consistent. It’s worked so far so I don’t see any reason to change anything.”

Following closely behind Arci is Jordan Crampton (London Hunt G&CC) with a score of -4. Crampton had a steady round, shooting 2-under par during both the front and back nine. Crampton and Arci we’re neck and neck on the leaderboard for the entire front nine, but Arci pulled away with his sixth birdie of the day on the 13th hole.

Behind the two top spots, was a three way tie for third. John Drewery (Westmount G&CC), Charles Fitzsimmons (Thornhill G&CC), and Jay Jewett (Timberwolf GC) all shot -3, sitting only one shot behind second. The three players all shot incredibly well throughout the day, making them clear favourites to push for the top spot in the second round.

Drewery and Jewett lead the Mid-Master section of the tournament, both sitting at -3 a piece.

Round two will continue tomorrow with tee times set to begin at 8:00am.