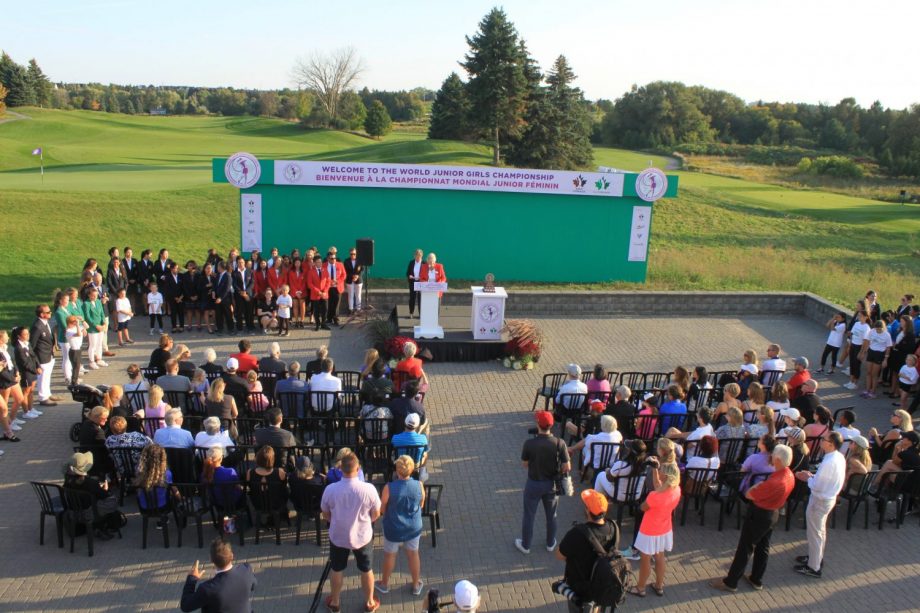 – Seventeen of the 60 athletes will be returning to compete in the event, including a record fourth participation for Italy’s Nobilio –

– As the host country, Canada will field two squads of three players –

MARKHAM, Ont. – It is a field comprised of some of the planet’s best young female golfers that will display their skills at Angus Glen Golf Club, as the sixth edition of the World Junior Girls Championship gets underway from September 24 to 27. In total, 60 athletes representing 19 countries—including two teams from host nation Canada—will compete for the team and individual titles.

“In collaboration with Golf Ontario and our partners, we are thrilled to present this first-class event featuring some the most promising female athletes the world of golf has to offer,” said Dan Hyatt, Tournament Director for the World Junior Girls Championship. “It is an honour for us to afford these talented juniors an opportunity to continue their growth and development.”

England is the only country in the tournament to have all three team members ranked in WAGR’s top 100. Lily May Humphreys (No. 29) will make her third WJG appearance and try to improve on her T7 finish in 2017. Joining her at Markham’s Angus Glen will be Annabell Fuller (No. 46) and Euphemie “Mimi” Rhodes (No. 95).

Returning champions Italy will be able to rely on Alessia Nobilio (No. 7) to lead the team. Nobilio will look to add to her record WJG individual medal haul after capturing silver medals in 2017 and 2018. The 17-year-old, who has seven top-ten finishes this year including two victories, will be joined by newcomers Carolina Melgrati (No. 115) and Benedetta Moresco (No. 34). The trio will look to bring a third World Junior Girls team medal to Italy.

The 2019 edition of the Championship will see several players return, as 17 members of the field have played in at least one World Junior Girls Championship, including double individual silver medallist Nobilio (Italy) who became the first repeat medallist in tournament history in Ottawa last year. Six players will be appearing in at least their third edition of the event, including Canadians Ellie Szeryk (No. 724) and Emily Zhu (No. 977), Switzerland’s Elena Moosman (No. 97), Mexico’s Cory Lopez (No. 314) and England’s Humphreys. Nobilo will make a record fourth appearance at the Championship.

Sweden will look to add a fourth team medal to their trophy case after earning one silver (2014) and two bronze medals (2015 and 2017). As the only Swedish player returning to the championship, Ester Fägersten (No. 180) will be joined by first-timers Louise Rydqvist (No. 439) and Sara Ericsson (No. 230).

Along with the returning teams and players, the World Junior Girls Championship is also pleased to welcome back the representatives of Germany and the Republic of Korea after a one-year absence, as well as to host Wales for the very first time.  The inaugural Welsh team will consist of Darcey Harry (No. 578), Ffion Tynan (No. 693) and Carys Worby (No. 799).

Joining the strong international field will be the six players chosen to represent Canada. Brooke Rivers (Brampton, Ont.), Euna Han (Coquitlam, B.C.) and Zhu (Richmond Hill, Ont.) will constitute Canada One, while Lauren Kim and Angela Arora of Surrey, B.C., will team up with Szeryk (London, Ont.) to form Canada Two. Team Canada will be looking for their first medal since capturing bronze at the inaugural World Junior Girls Championship in 2014.

In 2018 at Camelot Golf and Country Club, it was Italy that prevailed over the USA to capture the crown, registering a feisty 6-under performance (138) that allowed them to catch the Americans and force extra holes. Italy eventually came up on top to win their first World Junior Girls Championship gold.

Angus Glen Golf Club consists of two 18-hole championship golf courses in Markham, Ontario. The North and South courses offer variety, beauty and challenges. It has been ranked as one of the top 80 golf courses in the world outside of the United States. It was home to the 2002 and 2007 Canadian Open and an official host of the 2015 Toronto Pan/Parapan American Games.

The first round of play is on Tuesday, September 24. The tournament’s closing ceremonies will immediately follow the conclusion of play on Friday, Sept. 27.

ABOUT THE GOLF CANADA FOUNDATION
The Golf Canada Foundation is the leading source for golf philanthropy in Canada, awarding more than $6 million in grants and scholarships since 1982. The foundation’s mission is to support and promote programs that increase participation in golf by engaging players of all ages and abilities across Canada. For more information about what the Golf Canada Foundation is doing to support golf in your community, visit us online at www.golfcanada.ca/foundation.