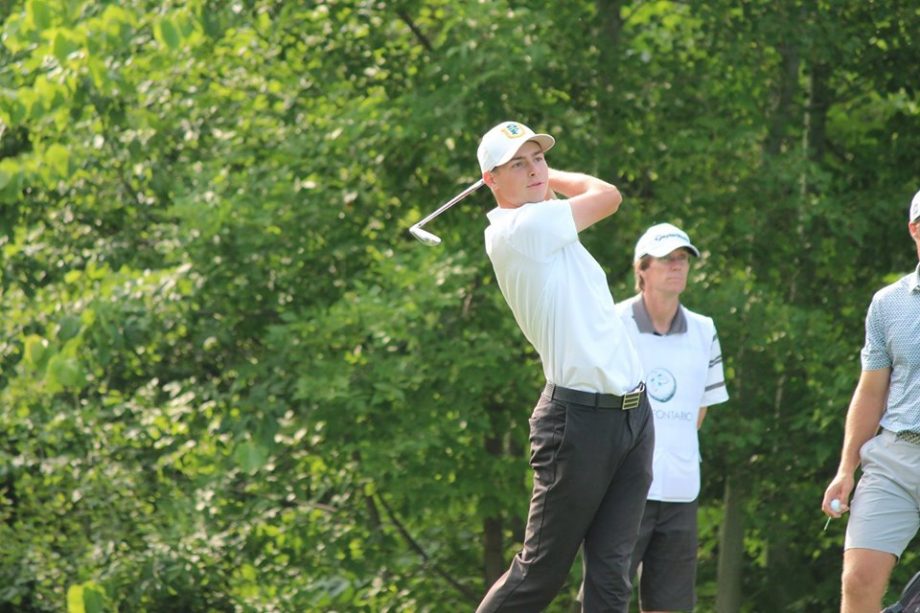 Collingwood, ON — Dewy grass and warm, sunny skies welcomed the players as they teed off for the second round of the 2019 Ontario Men’s Amateur Championship. The environment at Oslerbrook GC was more tense than the first day, seeing as only the low 60 players (plus ties) would make it past the cut for the third round. However, despite the added pressure to succeed, the players continued their steady play. Day two proved to be extremely competitive with multiple lead changes throughout, and when it was all said and done, it was Matthew Anderson (Credit Valley G&CC) and Charles Fitzsimmons (Thornhill Club) who came out on top to take the lead heading into the third day.

Finishing with total scores of 4-under (138), the two were lights out throughout the entire round. Fitzsimmons entered the day in a three way tie for first, but was able to pull ahead early by tallying three birdies in the second half of his front nine. Although he also carded three bogeys on the way, much like the previous day Fitzsimmons didn’t let it bother him, and continued to make up for it with steady play resulting in numerous birdies along the way. The Western graduate shot 69 both rounds of the tournament, proving his ability to play cool and steady even in tense situations.

Anderson joined Fitzsimmons at the top of the leaderboard after trailing him by a single stroke in the first round. Shooting 68 on the day today, the lowest score of the second round, Anderson picked up right where he left off from day one. Anderson has had an impressive showing throughout, and would be leading over Fitzsimmons if it wasn’t for the double bogey he hit on 12 on the first day. It was the only hole where the 19-year-old had looked shaky, but he continued to tread through nonetheless. Anderson took on the tricky twelfth hole during the second round with confidence, and breezed his way through to par.

“I had an unlucky bounce the first day on my tee shot, but I knew that I had to stay confident and accept the results of the shots I choose,” said Anderson. “I just had to shake it off and continue shooting the way I’ve been shooting all year.”

Anderson and Fitzsimmons will both be looking to continue this momentum heading in to the final two days of the championship.

Following the two leaders was a tie for third. Ty Celone (Public Player), and Cougar Collins (Rocky Crest GC) both had impressive rounds today, ending with even total scores (142). Celone entered the day tied for first, but after a few bogeys, he found himself drop back a placement. Collins was the opposite however, and entered the second round five placements behind first. Collins had an impressive round, giving him the chance to be striking distance from the top of the leaderboard.

Day three looks to be promising, as the low 60 (plus ties) will all tee off hoping to take the lead before the fourth and final day. There has been no clear leader since the opening tees of the first round, and the two final days will surely be just as tight.