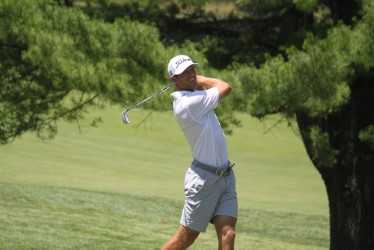 Day three saw some up and downs for almost everyone on a tough course however Garrett Rank of Elmira Golf Club leads yet again after the third round. Rank shot a 2 over (73) on his round today and finishes at five under with a five stroke lead after three days. His round started out with a one under front (35), with two birdies and one bogey but finished his back 9 (38) with a double bogey on the eighteenth after a putt hung right on the lip of the cup that just wouldn’t drop.

Thomas DeMarco of Essex Golf & Country Club had a stellar round shooting a 2 under (69) and jumped up to second place while Eric Flockhart, a Golf Ontario Public Player, shot a solid even par round (71) and sits in third alone. Home course native Cameron Kellett of St. Thomas Golf & Country Club shot an impressive one under (70) and finds himself in sixth.

Rank, an NHL referee, was a member of Golf Canada’s National Men’s Team from 2012-2014, and 2018 U.S. Open qualifier.  He also golfed with Team Canada in the Pan American Games in 2015, as well as winning the Investors Group Men’s Mid-Amateur Championship in 2015. He had a hat-trick at the Canadian Mid-Amateur championship, winning it three times in a row and finished runner-up in the 2012 U.S. Mid-Am. Winning the Canadian Mid-Am got him a ticket to three RBC Canadian Opens, making the cut in 2016.

The final round tomorrow should be a very exciting finish with so many exceptional golfers atop the leaderboard.

For more information, visit the tournament site at: https://gao.bluegolf.com/bluegolf/gao18/event/gao1881/contest/1/leaderboard.htm