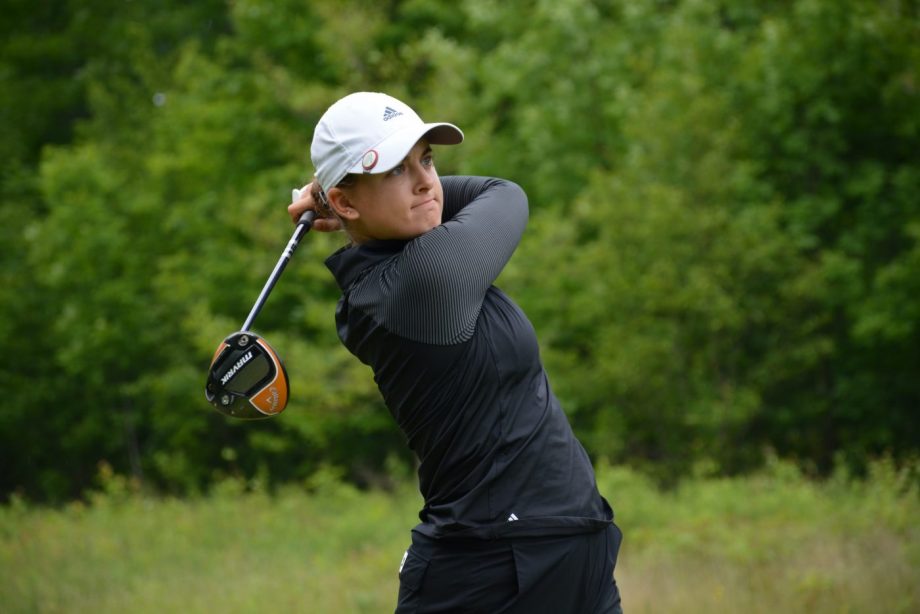 Gravenhurst, ON – The final day of the Men’s and Women’s Match Play Championship was a soggy one, with the rain beginning just before the semifinals teed off and getting increasingly heavier throughout the final round. With the rain cooling down the competition, we watched fierce players battle for a spot in the final championship round.

Fitzsimmons, the Team Ontario Mental Coach and 2019 Ontario Men’s Mid-Amateur Champion, commented that days one through three were a lot of fun. “I got to play against some great competitors and people I knew from University, as well as some of the kids from Team Ontario. I had some really good matches with a couple going down right to the wire so that was just an absolute blast, and just any chance I have to compete with the kids I coach is a lot of fun. I had some great competition all the way through, including Bavake (Sihota) yesterday, and then of course this morning which is always a tough match against the legend Dave Bunker.” Competing in his first Golf Ontario Match Play Championship, Fitzsimmons commented that “Taboo is a great course for Match Play. It really puts a premium on hitting good shots and keeping the ball in play, and that suits my game well. We were lucky that we could today in with the rain.” Fitzsimmons next championship tournament will be the Canadian Amateur.

On the Women’s side, Katona had a chance to put her skills to the test against well-known champions Judith Kyrinis and Terrill Samuel, commenting that “they are amazing people and unbelievable players, so kind and just amazing Women overall. I’m so honored that I was able to play with them and meet them.” Heading into the semifinal round “I knew that I had to play well this morning if I wanted to get into the final match, and I did just that. I didn’t get too far ahead of myself, I just stayed in the moment. Sadie (Dewinton-Davies) is a great player and I knew that I needed to make birdies. In the final round, Ashley (Lafontaine) was amazing as well and during the last few holes, the rain started coming down harder on us, so that made it a little bit tougher.” Never having played Taboo Muskoka, Katona loved the course and commented on how great the conditions were. You can follow along with Katona during her next competition at the Alberta Ladies in two weeks, with the Canadian Amateur and Ontario Amateur to follow.

Congratulations to runner-up’s Jeffrey Fang (Station Creek GC) and Ashley Lafontaine (Royal Ottawa GC), who both competed against experienced opponents. To close out the championship, Fitzsimmons shared how great it is to be playing competitive golf again and that “obviously COVID has been a tough year and a half on everyone, so it’s awesome that we can make this happen. A huge thanks to Golf Ontario for all they do and it’s great to see everyone again.” We’re thrilled to welcome Golf Ontario competitors back to the tee and are looking forward to a packed summer of competitive play.

To view the leaderboards from the 2021 Ontario Men’s and Women’s Match Play Championships, visit our Golf Genius page. For media coverage, please visit the Golf Ontario Facebook page to view our photo albums.

Established in 1986, The Ontario Men’s Match Play Championship is contested annually and features 64 of Ontario’s best amateur golfers that have qualified through one of six qualifying tournaments held earlier this season, or who have gained an exemption into the event. Notable former champions include Ontario Golf Hall of Fame members Ian Leggatt, David Hearn, David Byrne and Dave Bunker.

Key Provincial Competitions Protocols/Restrictions (as of May 31st, **subject to change)