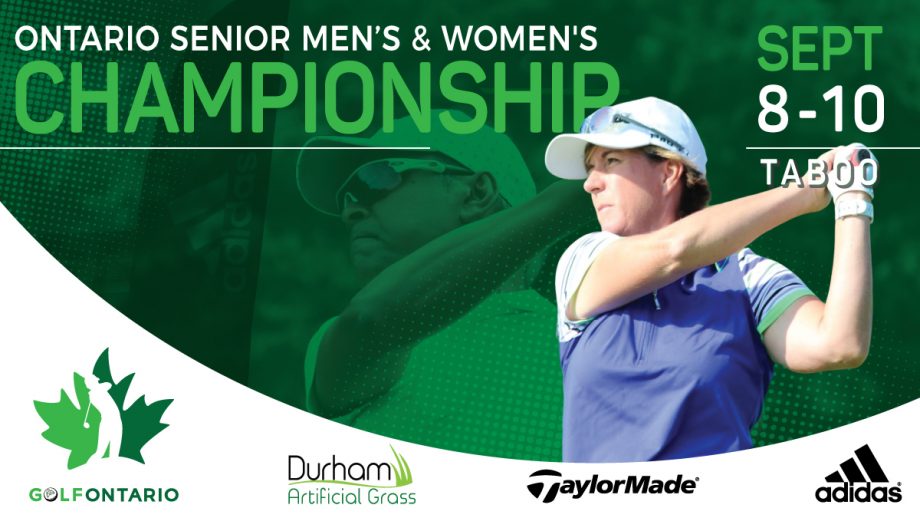 Gravenhurst, ON – Rated a top 100 course in Canada, Golf Ontario is ecstatic to announce the tee-off of the 2020 Ontario Senior Men’s and Women’s Championship, presented by Durham Artificial Grass, from September 8th to 10th at the stunning Taboo Muskoka Resort and Golf.

Originally a 9-hole course designed by Ron Garl, the course opened in 2002 making its major milestone in Muskoka’s emergence as a top North American golf destination. The renowned course has beautiful panoramic views and innovative use of the Canadian Shield landscape. In 2018, Taboo began renovations to “look at the bunkers and greens complexes, while making the course more challenging for the better player but less penial for the average player”. In speaking with Taboo Muskoka’s Golf Course Designer and Construction Manager, Alan Chudnovsky, he describes the course as a “blend of traditional Muskoka course and a traditional course feel in terms of the green complexes, with many bentgrass roll offs and opportunities to play your ball in the air while on the ground. Many holes have natural environmental protected areas, which have been strategically used in the design to create natural hazards on the golf course”. Players can expect challenging par three’s, “in which you’ll be hitting different types of shots and yardages on all four par three’s”.

The field competing in the Ontario Senior Women’s Championship is expected to be exceptionally strong, including two members of the Ontario Golf Hall of Fame. Five-time champion Mary Ann Hayward (St. Thomas G&CC) and three-time champion Judith Kyrinis (The Thornhill Club) are both returning for a chance at an additional title. Make sure to also keep an eye on 2011 Senior Women’s champion Terrill Samuel (Weston G&CC), whose been having a strong season with a second-place finish in the Ontario Women’s Mid-Amateur Championship.

First tee off of the day for round one on September 8th is set for 8:00 a.m… To follow the leaderboard, click here for the Men’s and here for the Women’s.