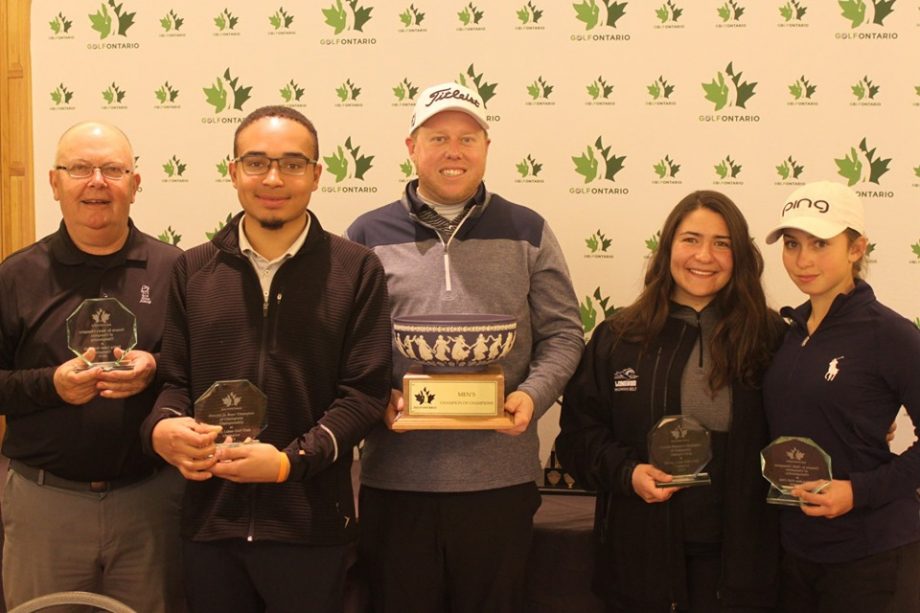 Stouffville, ON — Golf Ontario kicked off the 2019 golf season on May 14th with the annual Champion of Champions Tournament at Spring Lakes Golf Club. It was a cold and cloudy day, but it didn’t keep the 200-plus club champions’ smiles from lighting up the course.

For the second year in a row, Spring Lakes held all six divisions at the same time. Located in Stouffville, Spring Lakes has a wide open property with 54 holes, making it the largest private course in Canada, and an ideal location for such a large tournament. To start the day, players were grouped up and spread across 36 holes.

Similar to previous years, the tournament saw incredible competition with two divisions being decided in a playoff, and the other four all falling within a 3 shot differential for the lead.

In the Women’s category, Crystina Kertsos from York Downs Golf and Country Club held the lead, shooting +2 (73). Kertsos was closely tailed by Madelin Boyd, from Lakeridge Links Golf Club, who finished with a +4 (75).

“I want to thank my coach, Spring Lakes for hosting us, and Golf Ontario for organizing the event,” said Kertsos, when accepting the award. “At least one Kertsos had to win.” (Her dad competed in the Senior Men’s).

In the Senior Women’s, Sue Postian from Sunningdale Golf Club shot +9 (80) to take first. She was followed closely by Ivy Steinberg, from Granite Golf Club, who was only one stroke behind, shooting +10 (81). The two were chased closely in a two-way tie for third, with both Allyson Harrison (Cataraqui Golf and Country Club) and Sandy Byckowski (Brampton Golf Club) shooting +12 (83).

The Junior Girls was also a close race but Ava Koukofikas from Cedar Brae Golf Club finished +7 (78) with some stellar shooting to take home the top spot. Peyton Costabile from Whistle Bear Golf Club, and Skylar Kew from Dundas Valley Golf and Curling Club both finished +9 (80) only two strokes behind Koukofikas, but just couldn’t close the gap to take the lead.

Michael Ikejiani, from Barrie Country Club, led the charge in the Junior Boys division, shooting -3 (68). Ikejiani had the most commanding lead in the entire tournament. Ryan McAskill from The Club at North Halton shot even (71), finishing with a strong score, but still couldn’t catch the red hot Ikejiani.

The Senior Men’s division was a dog race and by the end, it had to go to a playoff. Allen Chapman from Lindsay Golf and Country Club, and Lars Melander from Hidden Lake Golf Club both ended the tournament +1 (73). Melander would end up taking first place in the playoff, beating Chapman one on one. Following closely behind the two were Dan O’Donoghue from Kawartha Golf and Country Club, Chris Markle from Dalewood Golf Club  and Joe Miszk from Lookout Point Country Club, who both shot +2 (74). It was a division of inches to say the least.

The Men’s division was also a very tight race.  It ended in a playoff between Chris Feenstra from Sunningdale Golf Club, and Zack Mason from Donalda Club, who both shot -1 (71). Feenstra took home the hardware with a nice putt, and solidified his place at the top spot.

“I’d like to thank Spring Lakes for the opportunity to play in this tournament,” said Feenstra. “And also thanks to Golf Ontario for hosting the event, it was an amazing experience.” Feenstra and Mason were followed closely in a four way tie for third. The tie included Scott Nelson from Beverly Golf and Country Club, Michael Zizek from York Downs Golf and Country Club, Ryan Jeffrey from St. Thomas Golf and Country Club, and Doug Brophy from Heron Point Golf Links. All four shot an even par (72).

Although the weather wasn’t ideal, the champions indeed came out to play. With every division being a really close race, it was a huge success and an extremely exciting day of golf.

To see more photos of the tournament, CLICK HERE

More about the Champion of Champions Tournament

It was in 1970 when the Ontario Senior Men’s Champion of Champions was first contested, which features senior men’s club champions age 55 and over from Golf Ontario member clubs. Past champions include Christopher Kertsos, Nick Weslock, Ed Ervasti and Patrick Suraj, who won the event a record six-times.

2019 was the second year that all categories of the event were combined and held on one day at one location.

Golf Ontario would like to thank Spring Lakes Golf Club and their staff for helping to host an excellent event. We would also like to thank all of the golfers who participated, and for their terrific competition that made this year so exciting. Thanks also to the Golf Ontario volunteers for their continued support of golf in the province.

The next Golf Ontario championship will be the Men’s Better-Ball, taking place on May 16th at Oakdale Golf and Country Club.