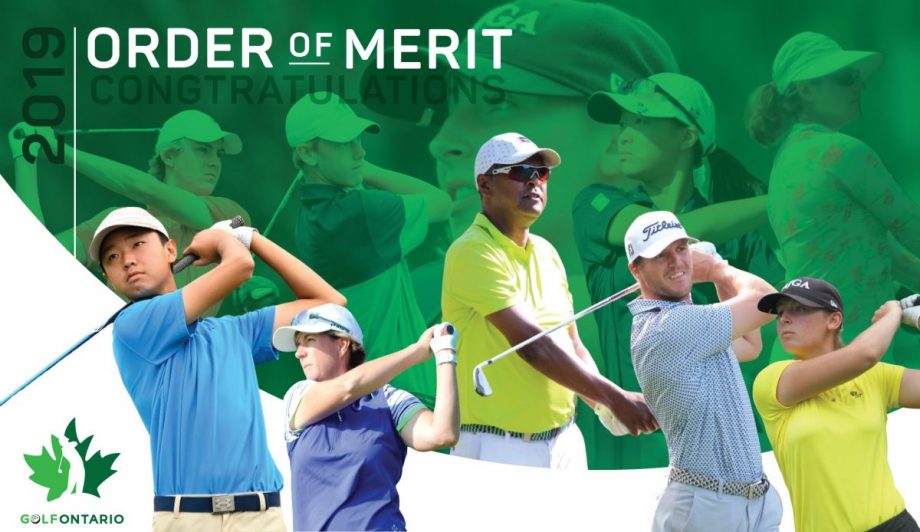 With a successful 2019 season in the books, Golf Ontario is excited to recognize nine athletes for their remarkable accomplishments on the golf course this past season. They will all now be eligible for the coveted Ontario Male and Female Ontario Player of the Year Awards to be chosen by a selection committee and announced at a later date.

The final standings for the Provincial Order of Merit were recently released, and the following athletes led their respective divisions, and have been recognized by Golf Ontario as Ontario’s top amateur golfers for 2019.

Mike Kelly, Executive Director of Golf Ontario was quick to sing the praises of these athletes: “These athletes have succeeded at the highest levels in each of their respective categories, while juggling academic endeavours with work and family schedules. Each athlete performed at the top of their category this past season, and Golf Ontario is privileged to recognize these individuals on their accomplishments both on and off the golf course”, said Kelly

Garrett Rank – Men’s Mid-Amateur & Men’s Amateur
Once again a familiar face leads the Order of Merit ranking for both the Men’s Mid-Amateur and Amateur divisions. Our 2018 Ontario Male Golfer of the year once again brought skill and perseverance to the course.

The 31-year old NHL referee from Elmira Golf Club, has been the Men’s Amateur leader in Order of Merit ranking for the past 4 seasons, and since becoming eligible for the Mid-Amateur category in 2013 has held on to the coveted top spot in that category as well.

Rank, an accomplished amateur, has done quite well for himself, from being next to the best hockey players in the world on the ice one week to getting the opportunity to compete against the best golfers in the world the next.  His highlight of the year was winning the 117th Western Amateur Golf Tournament. Rank was the first Canadian to win the event since Vancouver’s Jim Nelford in 1977, and the first non-US born victor since New Zealand’s Danny Lee in 2008. He credits the momentum and confidence he took from the final round of the Porter Cup as the push he needed going into the Western Am.

Rank spoke about the year ahead. “I’m looking forward to the Korn Ferry Tour start (an exemption from winning Western Am) and hopefully testing myself at the highest levels.”

Garrett would like to thank his team and all the support he has received. Also big thanks to Westmount GC, Elmira GC, the University of Waterloo, Dave Smallwood, James Skrypec, Dr. Rich Ennis, Drew Symons, Derek Ingram, Golf Canada and of course Golf Ontario.

Zhu said her highlights of the year were winning the Canadian Jr Girls Championship and finishing 2nd at the Ontario Women’s Am. “It was one of my goals this year to win the Canadian Jr. Girls Championships and I did it. It was a surprise for me to finish so well at the Ontario Women’s Am and I hope I can go on to win it next year”. She also added, “my chance to participate in the CP Women’s Open was incredible as it was my first official LPGA event so I’m very thankful and honoured to have had the opportunity to play.”

She would like to thank Golf Canada for the Team Canada program and coaching it provides, especially Head Coach, Matt Wilson for helping her. Zhu would also like to thank her dad for everything he has done, not only supporting her but coaching as well and bringing her to individual tournaments.

“I enjoyed the 2019 golf season. I was fortunate to play well and win two events”, said Dunning.  “As this was my first year as a mid-am I noted the contrast between mid-am and previous amateur competitions I participated in.  The atmosphere is competitive but there is camaraderie with your competitors. Everyone loves the game.  I look forward to next season and would encourage anyone of mid-am age to return to competition, it was really fun.”

Dunning would like to thank all of the volunteers, caddies, and rules officials who gave their time.

Chinner had one highlight in particular this year he enjoyed the most. “Playing in the final group at Taboo in the Ontario Seniors was a very enjoyable experience but, the final round in the Canadian Seniors with Lars was definitely the highlight, a tough day grinding out pars at Cedarbrae put a smile on both of our faces.”

He also mentioned receiving his Golf Ontario bag at Taboo was pretty enjoyable too. “I was just happy with my consistency… makes me look forward to 2020 opening day already.”

Chinner thanks his Team at Signature Risk (work) for holding down the fort while he was out playing.  He also thanks Golf Ontario, all the staff and the Golf Club’s that gave up their courses for competition this season and finally, his wife Stephanie, who walked every round rain or shine.

Judith Kyrinis- Senior Women
The 2019 Ontario Golf Hall of Fame inductee caps off another impressive season by claiming the Senior Women’s division in the Order of Merit for the fourth time.

Starting her season off with the thrilling Hall of Fame acclaim, Kyrinis, felt her highlight after that was without a doubt making birdie on 18 to win her 2nd Canadian Mid-am/Senior title as a validating moment.  “For all the work we put in, that was a pretty cool moment to do that“.

Another highlight she felt was being tied for low Am at the US Women’s Senior Open at Pine Needles, as the course was such a challenge for all that week.

“With all this snow right now, I’m looking forward to green grass in 2020! Seriously though, just the opportunity to tee it up against the best and test yourself. Sometimes you can surprise yourself and some days are disappointing but that’s golf, Kyrinis added. “Always keep learning.”

She credits any success she’s had in recent years to a great team of Coaches that have helped her achieve some amazing experiences in golf. Kyrinis would like to send huge thanks out to Matt and Liz Hoffman, Dave Woods and Jeff Hammond. “Of course I am also blessed to have an extremely supportive husband and family!”

When asked about a highlight of his season, Ruby had a similar answer to Latter. “The highlight of my season was winning the Can-Am matches with Team Ontario. Although I had a few other good finishes the Can-Am matches were by far the biggest highlight. Can-Am is something that I get really excited for every year and being able to win my doubles match with my best bud Dylan Henderson and also win my singles match to help the team win is something I’ll never forget.”

Ruby also mentioned his first round 67 at the Canadian Junior Championship as a moment that stood out. Although he was 5 shots back at the end of the day, Ruby really felt in control of his game at that point of the season.

He would go on to say, “In 2020 I am most looking forward to playing some bigger amateur events and playing on a bigger stage with Team Canada.”

Ruby would like to thank his parents for the support that they have given him throughout his junior career. Between the coaching, travel, hotels, physical training, physio etc. it really means a lot to him how much they’ve supported him and felt none of his success would have been possible without them. He added, “I’d also like to thank my coaches Nick Starchuck and Ralph Bauer for all of the work that they have put in with me and for improving my game. Lastly I’d like to thank the coaches at Team Ontario. Reggie, Nick, Charles, and Jessie. I really appreciate all the time that the coaches put into that program to help improve my game.”

Thomas Latter – Juvenile (U17) Boys
Winning this tough category for the season was Team Ontario member and Mississauga, Ont. resident, Thomas Latter from Credit Valley Golf and Country Club. Latter had 7 top 10 finishes including second place in the Ontario Junior Boys (U19) Match Play Championships to secure top spot in this Order of Merit category.

He had one definite highlight on his 2019 season, “winning the Can-Am matches in March down in South Carolina with Team Ontario was awesome.”

The moment that stood out the most for Latter was playing in the final round of the Canadian Juniors in New Brunswick with his older brother Robbie who was playing in his final Junior Tournament. Bennett Ruby was also their third which made it even more meaningful for him.

Latter is already looking forward to the 2020 season as well.  “In 2020 I hope to continue developing as a golfer and as a person.”

Brooke Rivers – Bantam (U15) Girls
In 7 events this season, Brampton Ont. native Brooke Rivers captured 4 top 10 finishes.  Building on momentum last year when she captured the 2018 Ontario Bantam (U15) Girls’ Championship, Rivers would find much success again in 2019.Highlights from this season include first at the Future Links Quebec Girls, fourth at the Canadian Junior Girls, third in the Ontario Junior Spring Classic (U19) Girls Championship from Wooden Sticks Golf Club and runner-up at the Ontario Women’s Match Play from Cataraqui Golf and Country Club.

More information on the Order of Merit can be found at gao.ca/excelling-performing/order-of-merit-rankings/