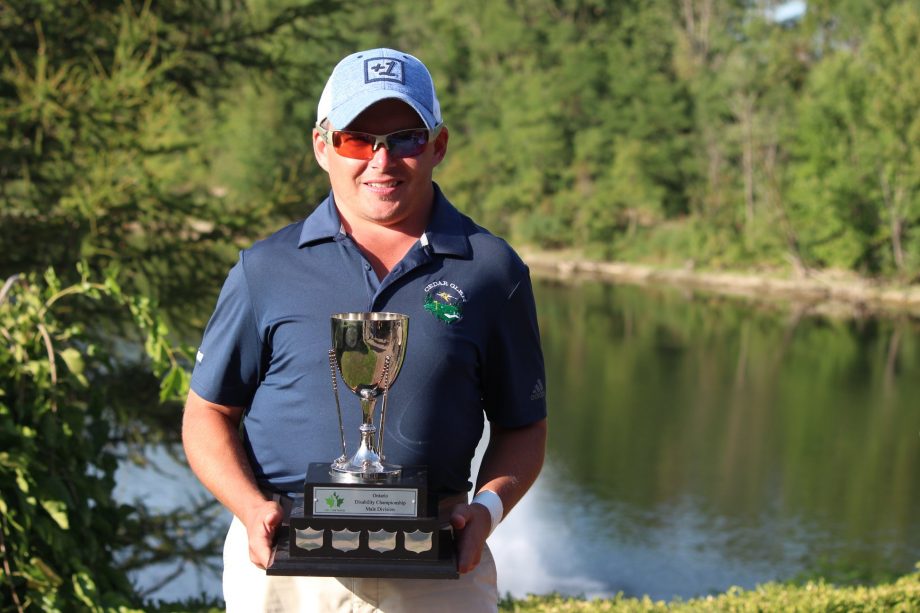 You know them by their surnames alone: Els, Day, Ogilvy, Garcia, Casey…and even Weir. They’ll all be in the field December 5-8 at The Australian Club in Sydney for the playing of the 104th Emirates Australian Open.

But Mike Weir will not be the only Canadian competing on the grounds of the club this week.

While some of the top golf pros in the world will be playing for the Stonehaven Cup, this year’s championship will also see the concurrent playing of the Australian All Abilities Championship (AAAC) presented by ISPS Handa. The circumstance will give the second edition of this tournament even greater exposure for a growing segment of golf.

Last year the AAAC invited their field based on the European Disabled Golf Association rankings but with the advent of the new World Rankings for Golfers with a Disability (WR4GD), North American golfers can now take part.

That means there will be more Canadian content than 2003 Masters Champion Mike Weir on the grounds at The Australian Club. Joining him there will be 32 year-old Kurtis Barkley of Winchester, Ontario, a small town located 45 minutes drive south of Ottawa.

Barkley, all five-feet of him, has become a well-known quantity in the National Capital Golf scene, often to the amazement of others.

2019 Ontario Disability Champion, two-time Ottawa Valley Golf Association (OVGA) City & District Champion, an OVGA Tournament of Champions winner, and victor at the Flagstick Shootout at Smuggler’s Glen in 2015, Barkley has proven himself on the golf course.

All this while dealing with challenges his competitors could hardly imagine.

When he was born to Kathy and Rick Barkley, he was abnormally small in size and they were told he might not survive. Tests revealed that he had severe Scoliosis with seven of his vertebrae fused together. Other skeletal issues in his torso caused breathing issues and also shortened his upper body.

It was not a very positive diagnosis but the younger Barkley has made the most of it, even when that meant spending a huge part of his youth enduring visits and tests at the Children’s Hospital of Eastern Ontario.  Unable to take on more physical sports like his brother he looked to golf to sooth his competitive spirit at an early age.

“What I have always enjoyed about golf is not only competing but trying to get better,” Barkley shared in an interview with Flagstick a few years back. “It doesn’t matter what you shoot in golf, there is always something you could have done better.  It’s a game (where) you can never stop improving. When I go out and play golf I’m just like anybody else.”

The recent proliferation of golf events around the world for those with physical restrictions crystallized a vision he always had to play the sport he loves around the globe.

That led him to competing on the European Disabled Golf Association circuit in 2019. In just five events he posted four top-three finishes, and he also won the inaugural Ontario Disability Championship. When an opening came available for a spot in the 12-person Australian All Abilities Championship, he did not hesitate to accept it.

You see, Kurtis Barkley is acquainted with the country. He lived there from the ages of 8 until 11. His father was employed by Winchester Cheese which has been sold to Australian dairy giant Bega. Their family, along with several others, made the move to help the parent company with brand operations. They lived in Tathra, about 400km south of Sydney.

It was a grand adventure for the family, and for a young Kurtis. He had started hitting golf balls at age 3, made it to the course at age 7, and the climate in Australia was favourable for both his body and his golf game, being able to play all year long.

Coincidentally, it was also the place where he first played golf competitively. When he came back to Canada at age 11 he has reduced his index to the same number, and he’s not stopped playing since.

The symmetry of it all is not lost on Barkley. “It’s crazy if you ask me, full circle indeed,” he shared just hours before he was set to embark on the punishing 23-hour journey down under.

Now the #18 ranked player in the WR4DG, Barkley reached as high as #13 during the season and the plus handicap player has a goal to be in the top 8 next year.

The appearance in Sydney will help that quest, but it will also be more meaningful, with a chance to also tee it up in the presence of some golf icons.

“I take great honour in representing Canada in Australia,” said with sincerity. “The 2019 golf season was a rollercoaster, travelling the world playing golf was a dream of mine ever since I was a kid. I was at the airport travelling to Las Vegas (to compete in a U.S. Adaptive Golf Alliance event) when I got the message that a player had backed out of Australia and I was first alternate. I am blown away to be able to play with the biggest names in golf.”

Barkley will be accompanied by his fiancé, Marissa Imrie, to Australia where they will spend two weeks in total.

He says he is looking forward to meeting Weir but, as always, the chance to compete drives him.

As for his strategy, he says he will do what he has done his whole life, on and off the golf course, do things his own way.

“Let’s just say I’ll play my own game, fairways and greens.” He then adds in his usual playful manner, “If I win, I win, but no one remembers second.”

The first round of the AAAC will be played Friday, December 6th, with the conclusion on Sunday, December 9th. The champion will be crowned at a ceremony alongside that of the Emirates Australian Open.

You can find out more about the Australian All Abilities Championship at this link.