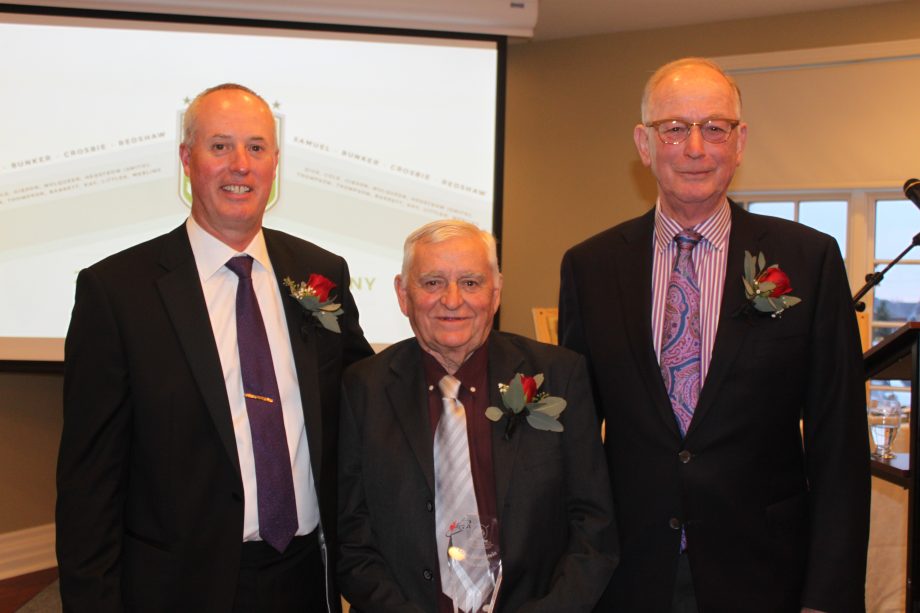 Uxbridge ­ -The annual Ontario Golf Hall of Fame ceremony was held on May 2, from Wooden Sticks Golf Course in Uxbridge. This year, three deserving inductees entered the Hall and one member of the Ontario golf media was honoured with the Lorne Rubenstein Media Award, Also a group of Posthumous individuals with golf accomplishments pre-dating the 1950’s were inducted. The emcee for the evening was Bob Weeks, a senior reporter and TSN’s golf analyst.

The evening began with the presentation of the posthumous individuals being inducted into the hall of fame, followed by the Inductions of Wayne Redshaw (with the Lorne Rubenstein Media Award), Terrill Samuel, Dave Bunker and Warren Crosbie.

Wayne Redshaw is a veteran sports writer and sports editor whose career began as a sports beat writer in 1962. Redshaw is also a member of the Sabres Hall of Fame and life member of the Professional Hockey Writers Association.

Terrill Samuel, enters the Ontario Golf Hall of Fame in the Amateur Golfer category. Samuel has captured many titles both provincially and nationally throughout her career. Provincially she has won the Ontario Women’s Amateur twice, Ontario Women’s Mid-Amateur three times and the Ontario Senior Women’s. Samuel also represented Canada on the international stage multiple times.

Another inductee in the Amateur Golfer category is Brampton’s Dave Bunker. Bunker, has amassed an almost immeasurable amount of championships and accolades. Just some highlights of his career include capturing 15 provincial titles including three Ontario Mid-Master titles, countless course Championships and 8 Canadian titles including The Canadian Mid-Master and Mid-Amateur for three straight seasons.