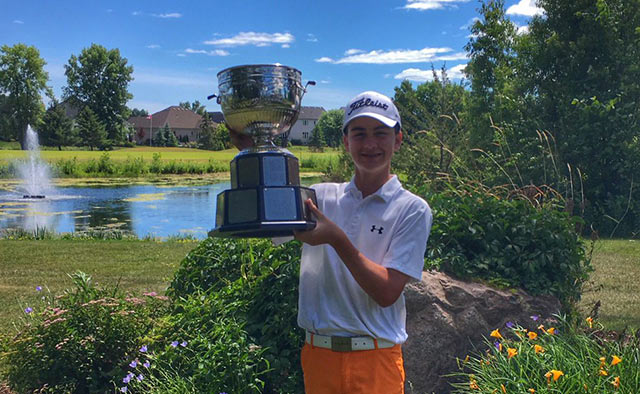 The Investors Group Ontario Junior (U19) Boys Championship took place this week at Loyalist Golf and Country Club in Bath, Ontario.  With most of southern Ontario in the midst of a severe heat wave, conditions were challenging throughout the week with temperatures well into the 30’s.

The heat finally lifted on Thursday night, and ushered in a cooler day on Friday for the final round. With that, though, came significant wind with gusts of over 40 km/h, making scoring a challenge for the competitors on the final day.

Fighting through the wind, and coming out on top after Friday’s final round was Nolan Piazza from Grand Niagara Golf Club. Nolan was one of the youngest players in the field, having just turned 15 years old on Tuesday (the first day of the Championship). The leader after the third round as well, Piazza fired a final round 71 (even par)  in the windy conditions to finish up at 282 (2-under par), good for a a 4 stroke victory over 2ndplace finisher, and Team Ontario member, Matthew Anderson from Credit Valley Golf & Country Club. Finishing in third place was Luc Warnock with a 4 day total of 287 (3-over). Piazza, Anderson, and Warnock will make up the inter-provincial team for the upcoming Canadian U19 Boys Championship.

Piazza was solid throughout the week, shooting 73-69-69-71 to finish at -2. Playing in the final group with Team Ontario member Matthew Anderson and public player Zachary Wylie, Piazza played masterfully in the windy conditions Friday to win his first Jr. Boys Amateur title. “It just feels amazing to get a win at this big of a tournament” said Piazza. When asked what he was most impressed with with his game today, Piazza replied “Ball striking today, especially in this wind. I hit a few errant shots over the last few holes but made up for those with my short game. It all just sort of worked out today” Piazza was also quick to thank those who helped him have a great week here at the beautiful Loyalist Golf and Country Club. “I would like to thank the GAO and Loyalist for hosting such a great event, and to thank my parents who helped get me here”

Thanks to Loyalist Golf and Country Club and all Volunteers

Golf Ontario would like to thank the amazing course volunteers at Loyalist Golf and Country Club for helping to make this Championship a great success, as well as the club membership for offering their facilities for use. The course offered up a great test for the best young male golfers in Ontario. Thanks also go out to the numerous rules officials, and tournament officials for their contributions in making this a fantastic tournament for all involved.

About the Investors Group Ontario Junior (U19) Boys Championship

The Investors Group Ontario Junior Boys’ Championship is open to male golfers 18 years of age and under, who have qualified through one of six qualifiers held across the province earlier this season. The Ontario Junior Boys’ Championship was first contested in 1923 at the Summit Golf & Country Club so this represented the 95thplaying of this prestigious event.  Past winners of the event include: Gerry Kesselring, Gary Cowan, Stu Hamilton, Mike Weir, Jon Mills and Albin Choi.

For results, visit the results page.