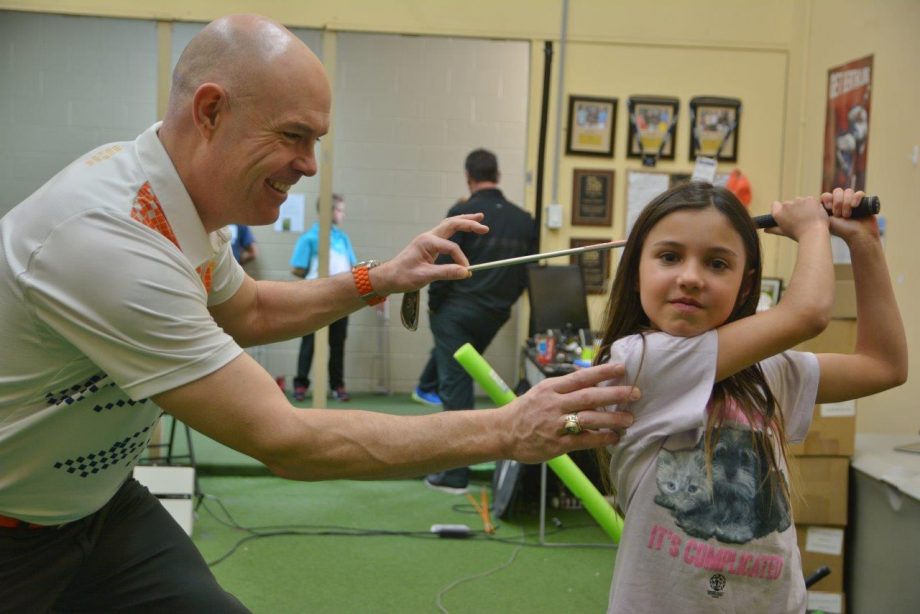 BURLINGTON, ON – For an eight-year-old, Vanessa Borovilos has an impressive collection of trophies and medals, but the one that earned an invite to Augusta National Golf Club and the 2015 Masters is extra special.

The Grade 3 student from Toronto is one of three Canadians, among a total of 80 participants, 40 boys and 40 girls between the ages of seven and 15, who will tee it up in the Drive, Chip & Putt Championship on the Sunday before the Masters at Augusta National.

“It’s pretty amazing to be going to the Masters. We’re flying in an airplane which should be fun and I’m really looking forward to the competition,” says Borovilos, who started working with Coach Doug Lawrie from Focus Golf Group in Burlington, last summer and will play and train out of Trafalgar Golf & Country Club in 2015.

She is proving to be a fierce little competitor as she made it through three stages of qualifying in Michigan to punch her ticket. “There’s a lot of standing around and waiting for this one, but to be going to Augusta during the Master and staying for a practice round it very cool,” says Borovilos, who started mini-putting at the age of two-and-a-half and had her first set of clubs by the time she was three.

Vanessa will not be the only Canadian competing in the girl’s 7 to 9 age division. Jayla Kucy from Camrose, AB won local qualifying in Dupont, Washington, a sub-regional event in Lacey, Washington, and then a regional final in Park City, Utah to qualify for the Drive, Chip & Putt Championship. Ryan Blair from Oakbank, MB also won the regional finals of the boy’s 10 & 11 age bracket in Minneapolis, Minnesota to earn his spot in the championship.

Borovilos won two qualifiers at different courses in Michigan in June and August to advance to the regional final in September at Prestwick Village GC in Highland Michigan. There she won the overall title, with victories in chipping and putting – and she’s working on the driving for the Masters.

“It’s a lot of driving around to get to the different qualifiers. When you’re there, it’s a lot of waiting because they get two drives and you wait for everyone else, next it’s three chips and you wait again and finally they get three putts and that’s it, but for a trip to the Masters and to compete against the best from across the United States, it’s worth it and I think she’s going to have a great time at Augusta,” says her father Dino who will accompany Vanessa along with her mother and brother. There’s also a players’ dinner to attend at Augusta National the evening before the championship.

At only eight years of age, Vanessa is a seasoned competitor and traveller. She started playing the Canadian Junior Golf Association tours at age five against eight and nine-year-old, has played twice at US Kids World Championship including a trip to Pinehurst Resort, she has been to the Callaway World Junior Golf Championship in San Diego where she finished sixth in the six and under division and teed it up at Doral and PGA National as part of the First Tee Program in the United States.

To prepare Vanessa trains three hours each Saturday with Coach Lawrie including some ping pong to work on her eye-hand coordination. Dad takes his daughter to the Golf Dome three nights a week to practice what they worked on during the coaching session. “We have made some pretty big changes to her swing over the winter and I’m excited to see how it plays out at Augusta and into the summer,” says Lawrie who is the Head Coach for the Golf Association of Ontario NXTee Youth Golf Program. “She doesn’t like losing and she has that calmness and confidence around her when she’s competing that you don’t see in every youngster.”

When she grows up, Vanessa would like to be just like American LPGA star Lexi Thompson, who turned pro at the age of 15. “I would like to jump into that pond, just like Lexi,” Vanessa told her father after watching Thompson win the Kraft-Nabisco Championship in 2014.

Regardless of how she does at Augusta in April, Vanessa has signed up for the 2016 Drive, Chip & Putt Championship.  If she’s successful at the sub-regionals in Buffalo, she’ll advance to the regional final at Oakmont Country Club in Pennsylvania and perhaps a return trip to the Masters in 2016.