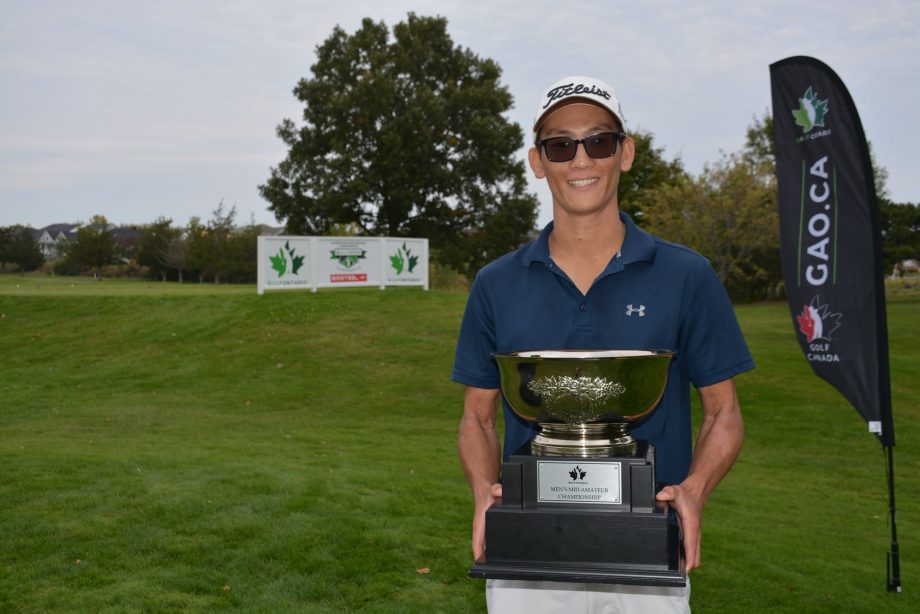 Bath, ON – The beautiful weather continued into the final round of the Ontario Men’s Mid-Amateur Championship, presented by BioSteel, at the brilliant Loyalist Country Club. With low winds and high competition, the final round was a nail bitter as players looked to climb the board for a podium finish.

Holding his own and leading the way for the entirety of the three days, Ryan Tsang (Cedar Brae GC) takes home his first Golf Ontario Championship title, as the winner of the 2020 Ontario Men’s Mid-Amateur Championship. In an impressive showing over the last few days, Tsang was able to hold his position in the final round after firing three consecutive birdies on the final three holes. The low score of 207 put him three strokes ahead of the two-way tie (210) for the silver medal. Taking home the silver medal are both 2019 Ontario Men’s Mid-Amateur Champion, Charles Fitzsimmons (Thornhill Club), and David Lang from the Donalda Club. Fitzsimmons was cool and collected, as he played another consistent round to finish with one-under par on the day. Lang had a rocky front nine, shooting a couple of bogeys and double bogeys, but finished the round strong after carding seven birdies on the day to go along with a beauty eagle on the eighteenth.

Reflecting on the final round, Tsang said “I just tried to play normally like I did in the first two rounds, and honestly there wasn’t much of a difference today, besides being able to lay up on the eighteenth and make birdie on the last three holes. Today was a bit tougher as it was a little windy and the nerves were going off a bit, but I held it together and crossed the finish line”. With a commanding lead heading into the final round of eleven-under par, Tsang commented that “the lead was pretty big, but with eleven-under, I thought that any one of these guys could do that as well”. When asked where this win sits in Tsang’s overall golf career so far, he felt that “this win is probably up to par with my Toronto Star win of 2014, but since there’s no Toronto Star anymore, this is probably the biggest win I have”. Ryan Tsang went on to thank Cedar Brae Golf Club, the three players who joined him from Cedar Brae GC (Wesley Kwok, Robert Gibson, and Brett Geiser), and of course his Mom and Dad for the continued support.

Golf Ontario would like to thank the players, staff, and volunteers for their support of the Ontario Men’s Mid-Amateur Championship. To the wonderful Loyalist Country Club, Geoff James (Director of Sales & Marketing, PGA of Canada Head Professional), Austin James (PGA of Canada Assistant Professional), and Jim Burlington (Operations Manager), thank you for being gracious hosts on such a well-conditioned course. A big thank you to the officials and volunteers, as they are extremely valuable and Golf Ontario appreciates the time they take out of your week to assist. Lastly, a huge thank you to the many Golf Ontario sponsors and partners, Adidas, Taylor Made, BioSteel, Modern Golf, Dormie Workshop, Durham Artificial Grass, Humber College, Barcelo Bavaro Grand Resort, Baka Mobile, and Play Golf Myrtle Beach. Your continued support is important to these championships.

For future results and information on the Ontario Men’s Mid-Amateur Championship, click here.