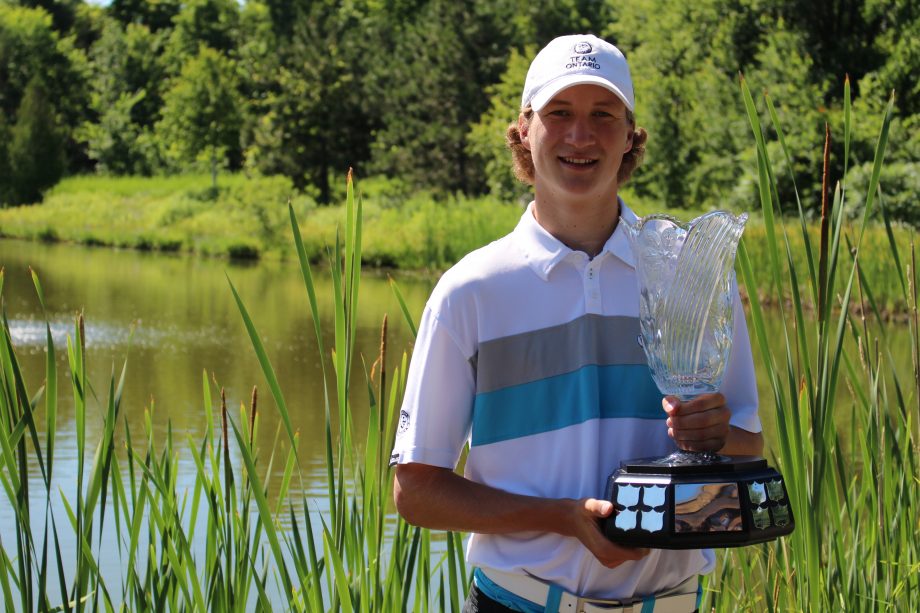 Ranton was ranked fifth heading into the match while Dobbs held the number three seed in the tournament. Ranton was dominant throughout the event. In the semi finals he earned a 7&6 win over Niagara Falls’ Jaret Chipman. In the quarter finals, Ranton was victorious 3&1 over Toronto’s Minwoo Park. Ranton’s quest to the title also went through Selwyn’s Mitchell Holden (5&4), Toronto’s Will Gavarkovs (5&3), and Shelburne’s Kyle Johnston (7&5).

After the win, Ranton talked about his successful week at the tournament. “I started the week playing really well. Through the middle three matches I faltered a little bit, but was still able to win the second and third matches pretty easily. Then in the quarter-final match, I was two-down through 11 and then found my game and managed to win. The semi-final match was my best of the week. I started with a bogey, but then followed it up with five birdies on the next 11 holes.”

It was the big win in his semi-final match that helped give Ranton the push he needed heading into the finals. “I got a lot of confidence and momentum after that and wanted to keep it going. I started really well in the finals. I started with a birdie and really got back in the grove I was in the day before.”

Ranton says there were points in the final match where he felt he was able to take control. “ He (Dobbs) made a couple of mistakes early and I kept playing steadily. I thought I was doing pretty well and then he made a birdie on 11 and put it really close on 12, so I kind of faltered there. But I got up and down to halve 12 and then birdied 13 and that’s when I thought I probably had it.”

Ranton still has a busy summer ahead including participating in the GAO Investors Group Men’s Amateur, the U.S. Junior Amateur and the GAO Investors Group Junior Boys Championship. Ranton said that the confidence from this win will go a long way in his future events. “Knowing that I can win on this stage, nothing is stopping me from doing it again.”

The Golf Association of Ontario would like to thank the members and staff of Taboo Resort along with all volunteers for their outstanding hospitality and use of the course throughout the week, as well as Investors Group for their ongoing support of amateur golf in the province.

The Investors Group Junior Boys’ Match Play Championship has been contested since 1998. Male golfers under 19 years of age before August 1 are eligible to compete. The field is determined by results from four qualifiers. Notable past champions include Matt McQuillan, Justin Shin, Stephane Dubois, and Jon Boncoddo.