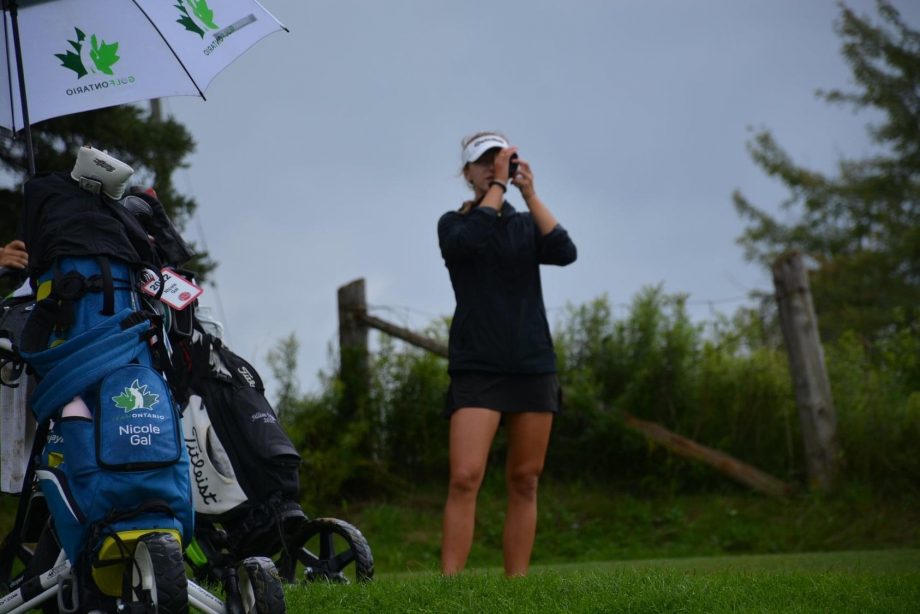 Melancthon, ON – Ominous grey clouds and windy conditions greeted the Ontario Junior (U19) Girls’ Championship this morning at Shelburne Golf and Country Club. With the sun trying to poke through all day over Shelburne, competitors are hoping that Mother Nature is good to them for the rest of the week.

The strong field is not only currently being led by three Team Ontario members, but by three Juvenile (U17) Girls’. Taking the lead in round one, Nicole Gal (Oakville GC) had a solid start with five birdies, leaving her sitting two under par. Tied for second, Sarah Gallagher (Blue Springs GC) and Katie Cranston (Oakville GC) will start off round two sitting one shot back. Positioned in fourth place also in a two-way tie on the leaderboard, Jacqueline Giles (Eagle Ridge GC) and Vanessa Borovilos (Weston G&CC), played a very consistent round with an even par for the day.

In preparation for the championship, Gal said “I had three practice rounds, two with my teams and one on my own to get more of an idea of the pin placement and greens. In terms of my play today I think everything went pretty well, as my long game and chipping were good which helped me get some birdies. My round today was definitely my most consistent of the season”. When asked what her game plan is going into round two, Gal commented “there’s not too much to switch up. I think I’ll take my time a bit more and commit to the line on my putt, as I left a few out there today. The plan is to keep is simple and consistent”.

The second round will begin at 7:30 a.m. tomorrow. For future results and information on the championship, visit the official championship page here.