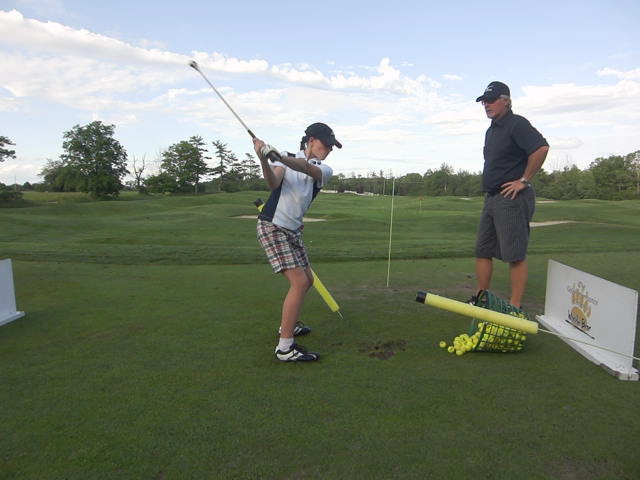 It’s been back to basics for Mike Martz over the past three years and he’s been loving every minute of it.

After nearly two decades as a head golf professional, Martz switched gears in 2011as he left behind the daily grind of managing golf course operations to join the Golf Performance Center at Whistle Bear and work with kids.

Since that time Martz, 50, has found his stride coaching and teaching young golfers while committing himself to becoming a leader in the field by attending and completing several PGA of Canada conferences including Coach of Developing (CDC) training, Coach of New Competitors (CNC) training and certification among other learning opportunities.

As a 12-year-old Martz started shining shoes at Conestoga GC and over a 17-year period worked his way up to being the club’s head professional. From there he went on to spend three years as an associate at Westmount G&CC before spending 14 years as the Head Professional for the City of Kitchener’s two municipal layouts. Now, his commitment to youth golf is paying off as he has been named The PGA of Ontario Junior Leader of the Year for 2013 and is looking forward to a super busy 2014. Martz will coach upwards of 250 young golfers this year – 80 per cent of his clients are junior golfers.

“With my degree in Kinesiology and a love for teaching youngsters, the transition to coaching has been smooth,” says Martz, a former US long drive champion who spent close to two decades doing clinics with legendary Canadian Golf Hall of Fame member Moe Norman including Norman’s last one in 2004 at Lionhead G&CC. “So many kids are left on their own to try and figure this game out and it can be a challenging journey. I try to come in there and give them some guidance and create a pathway for them to follow. I have seen a lot of children in the 11 to 13 age group who go through a growth spurt or an awkward stage and we just try to work on other aspects of their games until their growth settles down.”

He’s entering his third season as coach for the “New Competitors” team at Whistle Bear Golf, which is composed of 12, 9- to 14-year-old boys, and just added the Girl’s High Performance Team to his duties. “Mike is always committed to advancing his skills as a coach and is the first to register for educational opportunities. He has a thirst for all knowledge that will allow him to best progress his young students,” says Dave Smallwood, Director of Instruction at The Golf Performance Center at Whistle Bear.

At the grass roots level Mike runs eight one-week long summer camps for boys and girls aged 7-15 years at Guelph Lakes GC that has expanded to spring and fall sessions. He also leads an introductory program for mainly new to the game participants program for the Cambridge Junior Golf Association that includes 64 children from Cambridge. They receive two lessons from Martz and access to play Saginaw GC.

Mike was named Team Waterloo Regional Under 17 Head Coach for the Golf Association of Ontario in November along with Angella Lee who acts as the team’s strength and conditioning consultant. He’s working twice a month with a team of 12 boys and girls ranging from 10 to 16 years of age. They travelled together for a team competition over March Break in Myrtle Beach against regional teams from York and Ottawa.