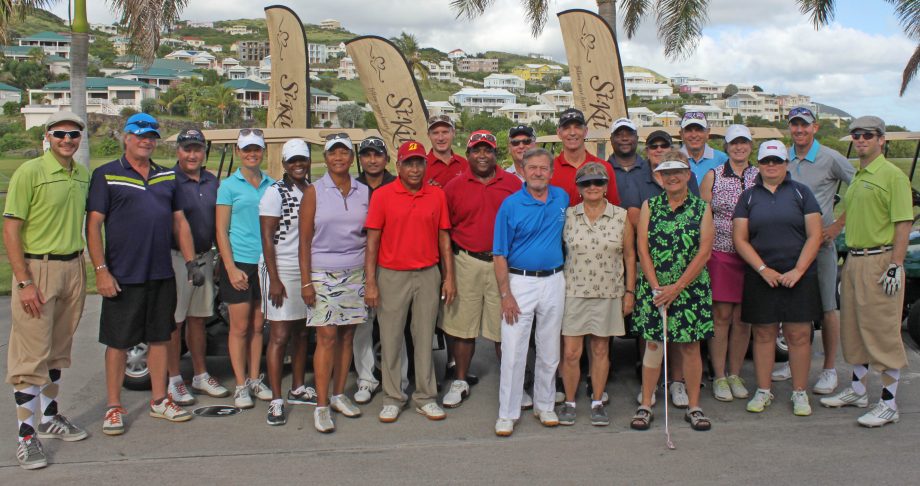 UXBRIDGE— It was a week to remember, Dec. 5-12, for all of the participants of the Golf Association of Ontario’s (GAO) Inaugural 2-Ball Invitational in St. Kitts and Nevis. The Caribbean island hosted a group of 20 golfers from Ontario, who not only played in a two-day tournament, but also got to experience everything that the island has to offer, thanks to the St. Kitts Tourism Authority, a partner of the GAO.

“It is so important to have partnerships, like the one with the GAO, because golf is one of our niche markets,” said Racquel Brown, C.E.O. of the St. Kitts Tourism Authority. “We want to promote golf, but also increase our visitor arrivals. We are hoping to see this partnership grow from year-to-year.”

After arriving at the Marriott Resort, the trip began with rounds of golf at the Royal St. Kitts Golf Club, host site of the St. Kitts 2-Ball Invitational. The 18-hole, par 71 course had many interesting features for the golfers to experience including fantastic views and holes that run along side the Atlantic Ocean and face the Caribbean Sea. Originally built in 1976, it was redesigned to highlight these features a decade ago by renowned designer Thomas McBroom. The course, just a short cart ride from the Marriott, seemed to be a big hit with the golfers.

“The course is absolutely beautiful! It is so picturesque, the weather is awesome and it is just a lot of fun to play, we are having a great time out here,” said Lindsay Knowlton, one of the golfers on the trip. “My favorite part was the third hole, hitting out towards the Caribbean Sea was so beautiful. The scenery is great and the course is in amazing condition. Even though it is Bermuda grass you can still get some pretty good lies.”

After experiencing the Royal St. Kitts, the group got the chance to see the country’s second course at the Four Seasons on the island of Nevis. A newer course that opened in 1991, the Four Seasons Golf Course featured even more outstanding views. On the front nine golfers climb the mountain towards Nevis peek and then descended on the back to wonderful ocean views.

“It is extremely important for us to have a good relationship with golfers. We realize that golfers not only look for a facility with a course but also a spectacular course,” said Mac Kee France, Director of Recreation at the Four Seasons Nevis. “We make sure that our course is ready to accommodate even the most discerning golfer.”

Those goals seemed to have been met after speaking with some of the participants. “This course is beautiful! There’s great scenery, it is in great condition, the fairways are lush, the greens are nice, there really isn’t anything to complain about,” said Christine Schlecht. “I like the up and downs and the water shots, you can just take a picture on every hole.”

After a day of touring the island and getting to see historical sites like the Botanical Gardens at Romney Manor and Brimstone Hill, site of a British Fortress now a world heritage site, the two-day tournament began at Royal St. Kitts.

Joining the golfers from Ontario were three local pairs to really give the event an international flavour. The format was a modified net stableford where the lower score between partners on the hole was used to determine points. After the first round there was a tie for the lead at 43 points between Knowlton’s team, paired with Anand Harridyal, from St. Kitts, and Harry Harridyal and Sylvia Jones, also residents of St. Kitts.

The second day saw some great scores on the golf course including a 66 by Knowlton, which earned her the ladies’ course record. Her amazing day helped her team finish in a tie atop the standings with the team of Dave Ramsumair and Lorena Clark. After going through the GAO tiebreaking procedure, the local team was awarded the trophy as the first winners of the St. Kitts 2-Ball Invitational.

That night an awards ceremony was hosted at the Marriott and featured a special guest, the Hon. Mr. Lindsay F.P. Grant, St. Kitts and Nevis Minister of Tourism, International Trade Industry and Commerce. The minister talked about how happy he was to see a travel group experience the island. “All I have heard are a lot of accolades: the golf has been fantastic, the friendliness of the people and helpfulness of the staff, along with the warmth of the atmosphere, the nightlife and restaurants. I think everyone on this trip has had a wonderful time. I went around and spoke with people on the trip and many said they would definitely come back and try to bring some of their friends too, to make it a much bigger occasion. We are grateful for not only the GAO but for the entire golfing community in Canada. St. Kitts is grateful for the partnership and collaboration between the two groups.”

This year’s event may have come to a close, but all indications are that the event will continue to grow and become bigger and better. St. Kitts is working on two more courses for golfers to experience Irie Fields at Kititian Hill and Christophe Harbour.

Irie Fields is expecting completion in 2016 and will be a 100 per cent organic, edible course. The course will feature numerous fruit trees so that golfers can taste a variety of fruit during their round before returning to the clubhouse on Belle Mont Farm for a fresh meal sourced from the farm itself.

As for Christophe Harbour, this course is set to be one of the jewels in the Caribbean. Designed by Tom Fazio, the course is hoping to be one that gets the island on the world golfing stage.

“At the moment we have two courses but in the next 18 months we plan to have two more come on stream and therefore will put us in the category of a golf destination. I think that is what golfers want to see so that when they come for a week they can experience four unique courses with two islands being experienced, which is something I don’t think to many other places can offer,” added Minister Grant.

The GAO would like to thank all of those who participated in the trip. Also, a huge thanks to the St. Kitts Tourism Authority for giving the group a first class experience of the island. From cultural sites, to the fine restaurants, they truly helped make it a memorable experience. In addition, thanks to the courses and resorts themselves for hosting the group. Stay tuned for details on next year’s St. Kitts 2-Ball invitational for your chance to experience St. Kitts.