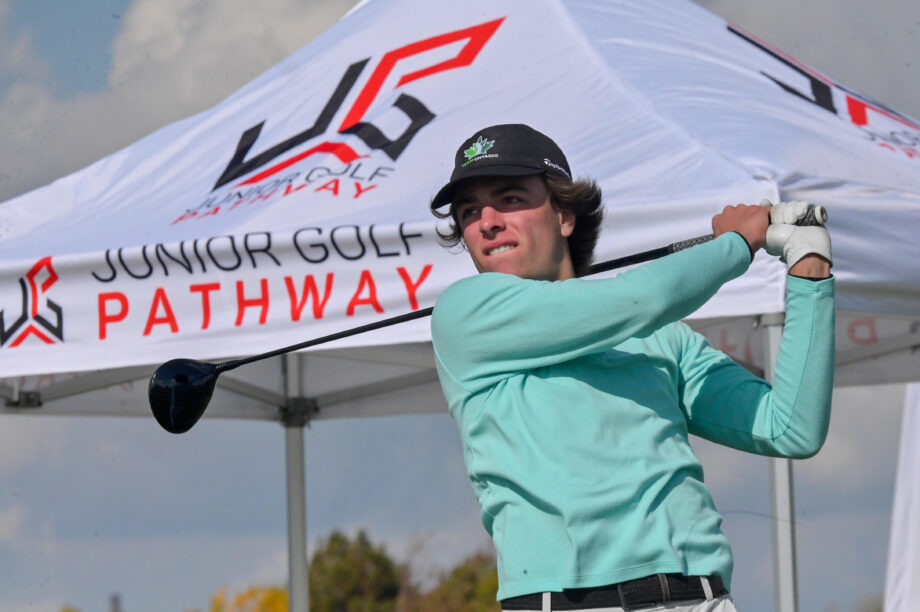 Windsor, ON – Tough conditions greeted players for round two action of the third annual Tour Championship from the 2022 Ontario Provincial Super Camp presented by Foresight Sports at Ambassador Golf Club. Cold weather mixed with severe winds gusting to 40 km/h made the golfers compete against each other as well as the elements and course on moving day.

Zach Smith (Brampton Golf Club) took charge on the boy’s side with a strong -3 (68), including an eagle on the third hole to take a four-shot lead into tomorrow’s final round. Matthew Rastogi (Meadowbrook Golf Club) is in second place after firing a solid even-par (71). Sitting in third is Dylan Weber (Galt Country Club), who shot a 2-over (73). Smith said after his round, “I just stayed calm all day, stayed patient… I knew it was going to be windy out there… just played the wind the best I could and took advantage of the par fives.” Smith recorded his first-ever competitive hole-in-one yesterday and mentioned, “a tournament one feels so much better.“

Emily McKee (St. George’s Golf & Country Club) secures her day one lead after another strong outing despite the conditions. McKee shot a 6-over (77) to take a three-shot lead into final-round play tomorrow. The low girl’s round went to Team Ontario Member Lindsay McGrath (RattleSnake Point Golf Club), who carded a brilliant 74 under the extreme wind and challenging greens to find herself in second. Players tied for third include Shauna Li (Station Creek Golf Club), Alexa Ouellet (Weston Golf & Country Club) and Kelly Zhao (Station Creek Golf Club) at +11. Mckee remarked, “the wind was crazy, you really have to focus on club choices and stuff… mistakes are going to happen, don’t get down on yourself.”

Competitors of the annual Ontario Provincial Super Camp and Tour Championship will be looking to win the Dave Mills trophy tomorrow. The award, first handed out in 2021, was named in honour of Mills, a past Golf Ontario Executive Director and massive supporter and advocate for junior golf, who presented the first-ever Tour Championship trophy in 2020. The 54 top junior boys and girls invited to compete at the 2022 Ontario Provincial Super Camp presented by Foresight Sports Canada have earned their spot in the Tour Championship based on the Junior Golf Pathway Rankings.

Tee times for round two start at 8:30 am Friday morning. For more information on the 2022 Ontario Provincial Super Camp Presented by Foresight Sports and Tour Championship, visit our Golf Genius page.