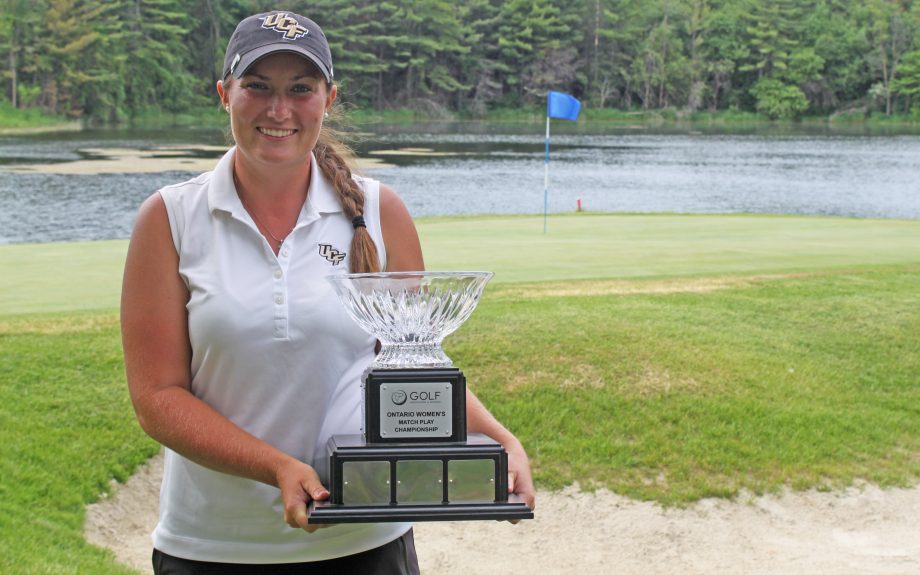 TOTTENHAM, ON— The field battled rain and heavy winds at times during the Golf Association of Ontario’s (GAO) Women’s Match Play Championship at Woodington Lake Golf Club’s Legacy Course, June 2-4, but when it was all said and done, a familiar name was the last one standing. Seaforth resident Robyn Doig capped off the week with a 1up victory over Concord’s Christina Foster.

The two were neck and neck throughout the front nine with Doig taking the lead on the second hole, only to see Foster square the match on five. The two traded the next two holes and after nine it was all square.

On the back nine, Doig, the Seaforth Golf Club and current University of Central Florida team member, fell behind after Foster, GAO Public Player, birdied the 11th hole, but a par on 12 allowed her to get the match back to even. On hole 15, Foster bogeyed the Par-3, while Doig pared, giving her the 1up lead. That lead lasted only one hole as Doig would bogey the 16th. Doig regained the advantage with a birdie on the 17, setting up a do or die for Foster on the 18th. Doig would hang on after she split the hole and earned her second-straight Match Play Championship.

After the match, the 22-year-old Doig talked about what it meant to win the event for the second year in a row. “I am really excited. It’s an honour to win this event because so many great players play in it and it is really cool to have my name on the trophy, twice.”

When asked about the turning point in the round she said she wasn’t sure if there was an exact moment. “We were pretty steady back and forth for basically the whole match. I guess the birdie on 17, it put me 1up with one to play so I knew I needed a couple good shots on the last hole but the birdie was really what I needed.”

Earlier in the day, Doig, who was ranked first after the qualifying round, defeated Uxbridge’s Gail Pimm, ranked fifth, in the semi-final 4&3, while Foster, the third seed, eliminated the number two seeded, Elizabeth Tong from Thornhill.  Doig’s road to the championship also went through Pickering’s Meghan Bennett in the quarterfinals and Stouffville’s Ivy Steinberg in round one.  Foster defeated Courtney Tolton of Mitchell in the quarters and Unionville’s Natasha Lehman in the first round.

Doig attributed her success during the week to her overall consistency. “All week I think I played very steady. I didn’t get myself into too much trouble that would cost me in the long run. I was happy with how I controlled how I was feeling throughout the matches. Even if I did lose a hole, I knew the next tee was a new hole so I was happy with how I played.”

For Doig the win is a nice addition to her provincial trophy case. In addition to last year’s Match Play Championship, she was also the 2013 Investors Group Women’s Amateur Champion, which she also won at Woodington Lake.

“It’s hard to say what it is that I like about playing here because the Old Course it totally different than the one we played here this week. So I guess it is just a great place to be.

The Ontario Women’s Match Play was first played in 1975 and has several notable past champions including World, Canadian and Ontario Golf Hall of Fame member Marlene Streit, six-time champion Mary Ann Hayward, Terrill Samuel, and Heather Kuzmich. The Golf Association of Ontario would like to thank Woodington Lake for hosting the event and for their continued support of golf in Ontario.