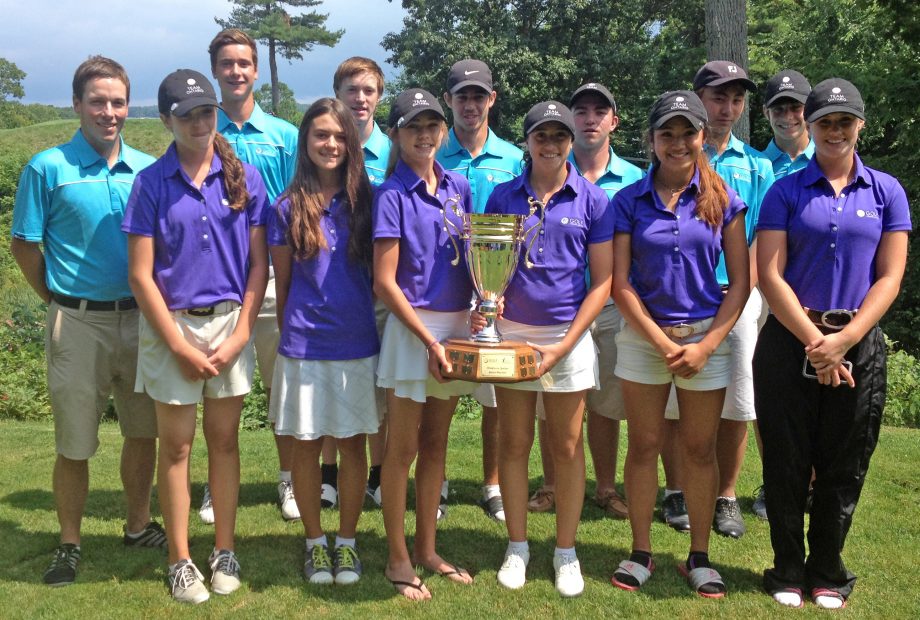 GANANOQUE, ON— It was a chance for the Golf Association of Ontario (GAO) to showcase it’s Regional Team Program as 12 members from the three Regional Teams (Ottawa, York and Waterloo) were selected to comprise the 2014 Ontario roster for the Ontario/Quebec Matches, July 22-23 at Smugglers Glen Golf Course in Gananoque, Ontario.

The Ontario team was coached by Jeff Overholt, head coach of the York Regional Team. Overholt was selected as the coach for this event as a result of his York team winning the GAO Regional Team Competition held during March Break in Myrtle Beach.

This was the second consecutive year that Smugglers Glen Golf Course hosted the event and the players were eager to hit the course for the opening round four-ball matches on July 22.

Ontario got out to a good start, taking five of the six matches. O’Hara and Nicklaus Naumovski earned a 4&3 win, Bryson and DiCienzo took their match 4&3, Alexandra Naumovski and McDonald won 2up, Barclay and Cushing got the victory 4&2, and Portokalis and Basanisi won 4&3. The only loss for the team came in MacDonald and Yoon’s match where they were defeated 5&3.

Even with their lead after the first day, the team needed to have a strong second day during the singles matches as 12 points were still on the line.

The day began with the Ontario girls remaining perfect. Cushing won her match 2up, Basanisi took hers 5&4, Barclay was victorious 4&3, Portokalis earned a 5&3 decision, McDonald won 3&2, and Alexandra Naumovski posted a 6&4 win. As for the boys, unfortunately, three members of the Quebec team were struck with illness the night before resulting in forfeited matches. Bryson, Nicklaus Naumovski and DiCienzo were all awarded their matches by default. In the other three matches, things were very tight as all three went the full 18 holes. O’Hara won his 1up, Yoon, who had a pair of eagles and five birdies on the round, ended all square, and MacDonald was edged out when his opponent birdied the 18th hole and lost 1-down.

GAO Manager of Sport Performance, Mary Ann Hayward, gave full credit to the Regional Team Programs for the athlete’s preparation for the event. “All the players here this week seemed very comfortable with the team format. Their regional team experience last year, as well as the March Break Regional Team Competition in Myrtle Beach, seemed to prepare them very well for these matches. Jeff Overholt did a great job with the team this week and versed them very well with the strategies for team match play. We must also give credit to Adam Holden (Team Ottawa head coach) and Mike Martz (Team Waterloo head coach) for the work they did with these regional team athletes throughout the past winter.”