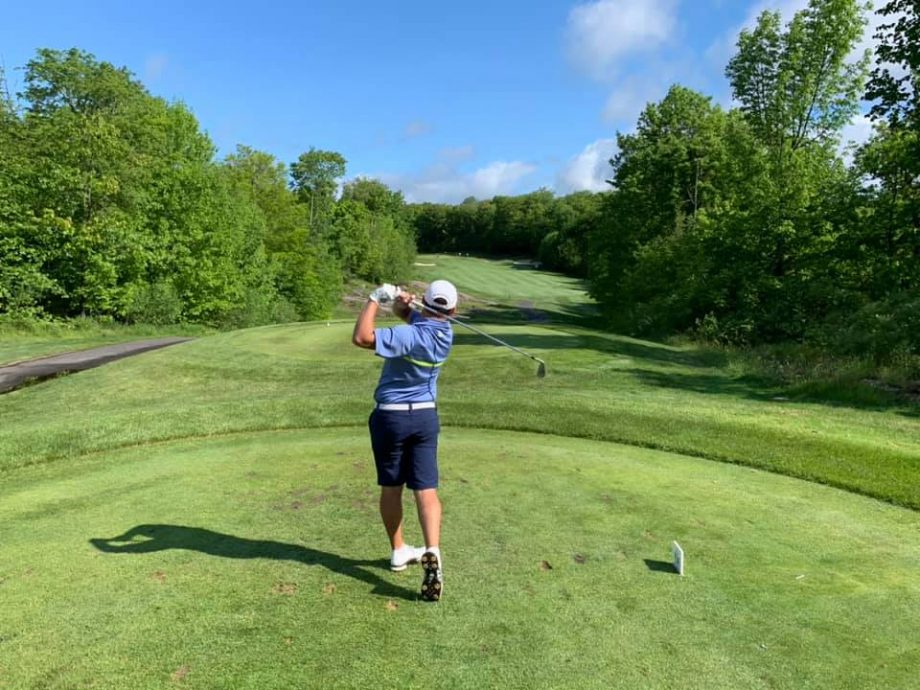 Port Carling, ON — Unlike the first round, day two of the Men’s Match Play Championship at The Lake Joseph Golf Club welcomed the 32 remaining players with sun and clear skies. Both rounds 2 and 3 took place, cutting the field of players to only eight by the end of the day.

Round two saw 16 players go home after a well fought 18 holes of golf. Players elevated their game from day one, hitting circus shots like Zack Mason’s chip shot right into the hole, and Cameron Kellett’s beautiful fairway shot leading inches from the hole. The competitors took advantage of the nice weather and made sure to excercise their A-game. Although all players had a strong round, only half the group would move on to round 3.

Tyler Harvey (York Downs G&CC) and Peyton Callens (Delhi G&CC) kicked off the third round at 1:28, followed by the rest of the 16 shortly after. All eight pairs hit the fairway with confidence, having played the course at least twice already. Picking spots, and hitting near-perfect drives, the competition was fierce.

The biggest surprise of the round was Ty Celone. Celone, a Team Ontario member, was listed at the 63rd seed, and was matched up against last years finalist Eric Shea (Brantford G&CC) in the first round, and a red hot Zack Mason (Donalda Club) in the second. Through the adversity however, Celone came out on top, and went into the third round going head to head against the talented Dan Kavanagh.

In his match with Kavanagh, Celone came out on top at 2 & 1, thanks to his 2-iron, and some steady shooting.

“It’s been a tough tournament, having to go up against such great competition,” said Celone when asked about his low seeding. “Luckily I’ve been pretty consistent throughout the last two days, but they’ve definitely been hard fought battles.” Celone expects to maintain his momentum heading into the quarter finals.

Cameron Kellett also had a strong showing in the third round, continuing his hot streak from the morning. Winning on the 16th hole with a score of 3 & 2, Kellett shot smooth and steady, beating Logan Hawke (Mississauga G&CC) to move on to the quarter finals, where he will face Aiden Gavey (Beverly G&CC).

The remaining 8 players will tee off for the Quarter-Finals Wednesday, June 12th for what should be another compelling round of golf. Tee times are set to begin at 8:00am.

The Golf Ontario would like to thank The Lake Joseph Club and their staff for their continued support of the Ontario Men’s Match Play championship.