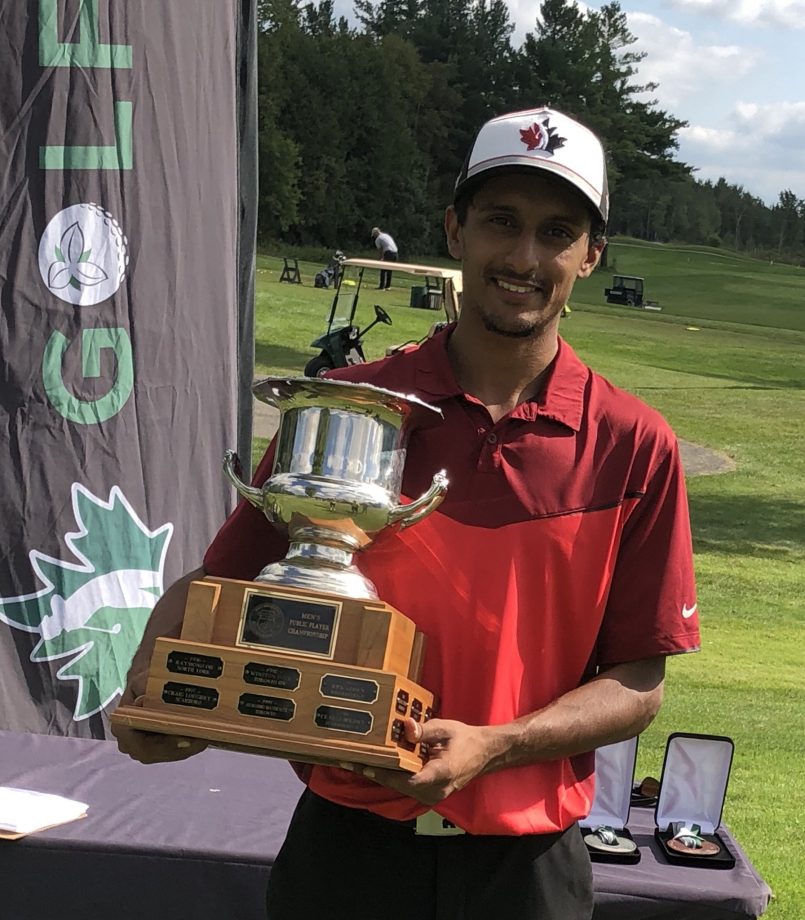 After a cool and damp first round of the Baka Public Player Championship, players enjoyed a spectacular day of weather on Day 2 at the beautiful National Pines Golf Club. Temperatures in the mid 20’s with a light wind made for an extremely enjoyable day as players battled for Public Amateur supremacy.

With three championship flights up for grabs, golfers in the A flight (gross) and B and C flights (net) again took on the picturesque and challenging National Pines course.

The overall winner and winner of the A flight (gross) competition was Aurora’s Shyamal Nagindas. The Day 1 leader with a +1 score of 73, Nagindas fired another stellar round of +1 on Day 2 for a total Championships score of 146 (+2). His 2 day total was enough for a four shot victory over 2nd place finisher Jeremy Wilson of Waubaushene who was one stroke ahead of 3rd place finisher Robin Petras of Newmarket. Nagindas, who said this was likely his last amateur event before turning professional, was understandably ecstatic with his win “This is likely my last event as an amateur and I thought if I played my game and focused on one shot at a time then I would have a chance to win. I found something with my irons and was rolling the putter extremely well and that added up to a win”, said Nagindas.

Winner of the B Flight and the first net score competition, was Jerry Power of Brampton. Sitting in 2nd place after day 1, Power shot his second net 73 in a row for a 146 to take the net B flight crown by 3 strokes over first round leader Robert Sterling of Mississauga, who finished at +5. Power was thrilled with the win “I was just trying to get experience. I’ve played in a few senior events, and wanted to try something different. It is a beautiful course, and I would like to thank Golf Ontario, and the volunteers, for a fantastic experience”, said Power. In a tie for 3rd in this flight were Greg Colling and Rob McLean with a total net score of +6.

The C flight Championship ended in regulation with a 2-way tie for the lead between Robert Fulton and Steve Stone. Stone and Fulton both finished at -2 for the Championship, and went to a 3-hole playoff to determine the winner. After a closely contested playoff, Toronto’s Fulton emerged as the winner of the C flight. Said Fulton “18th or 20th time is a charm. Having played in this event probably 18 or more times, and with two 2nds and a 3rd under my belt, it feels great to finally get the win”.   2nd place went to Whitby’s Stone followed by the 3rd place finisher (and first day leader) Romie Lat who finshed three shots behind the leaders with a two day total of +1.

For many competitors this was their first experience competing in a Golf Ontario championship while others are seasoned veterans. The Baka Public Amateur Championship provides the perfect opportunity for those interested in trying a competitive tournament while providing gross and net flights. This allows higher handicap players to play against players in their handicap grouping. Anyone who has considered trying one of Golf Ontario’s events should look to the 2019 Baka Public Amateur Championship as a great starting event.