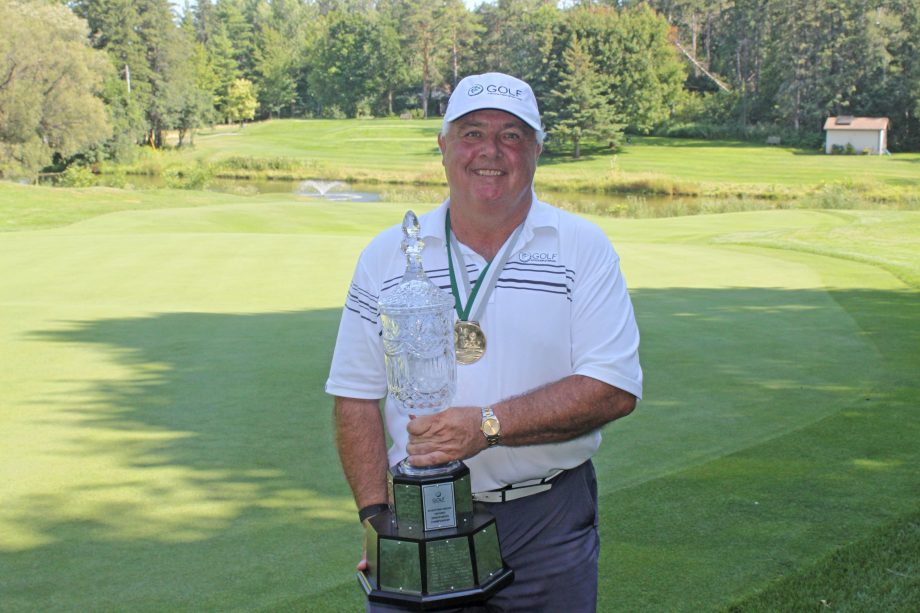 Jackson, from Collingwood and the Georgian Bay Club, entered the day with a three-shot lead and would use his consistency to help maintain it. The 62-year-old sank a birdie on the ninth hole, to get to even at the turn. Jackson was three-over on the back nine, which ended his day at three-over (74), bringing his tournament total to five-over (71-73-74-218). The win marked the third time that Jackson has won the Ontario Senior Men’s Amateur Championship. Jackson also earned the 60+ Division title.

A satisfied Jackson spoke about winning the title for the third time. “It’s always a pleasure win and a pleasure to get out with the guys and have our competition. We may call it friendly, but winning is what we come out here to do. I came in with a game plan; I didn’t want to go for par-five greens in two because I knew I would be above the hole. My plan was to put a wedge in my hands on par fives and stay below the hole.”

Jackson said that a key putt on the back nine was what he considered the turning point. “What settled me was making a birdie on the 12th hole. It was downhill and maybe a 25-footer, so that settled me. I knew I had some distance at that point.”

Picking up the silver was Richmond Hill’s Michael Mealia. Mealia, from the Bayview Golf and Country Club, entered the day at eight-over after the first two rounds. After an even front nine, he found himself four-over with two holes to play. However, he finished with birdies on the final two holes to finish second with a tournament total of 10-over (77-73-73-223).

In the 70+ Division it was St. Catharines’ Les Westlake who took home the trophy. Westlake, from the St. Catharines Golf & Country Club, finished the tournament at 16-over (76-75-78-229), to grab the title in his first year of eligibility.

Team Ontario for the Canadian Senior Men’s Amateur Championship, Sept. 1-4 at Desert Blume Golf Club in Medicine Hat, Alberta, was named following the round. Joining Jackson and Mealia, after winning a playoff on the 18th hole, was Melander.

In addition, the top eight finishers earned the right to represent Ontario at the 2016 Ontario-Michigan Matches to be hosted by Michigan. Earning a spot on the team were: Jackson, Mealia, Melander, Bergeron, Paris’ Robert O’Hagan, Brampton’s Rick Dodds-Hebron, Whitby’s Barry Fairhurst, and Caledon’s Marty Quincey.

The GAO would like to thank the Kawartha Golf & Country Club, their volunteers and staff for hosting the event. Thanks also to the GAO volunteers and title sponsor Investors Group for their continued support of golf in the province.

For full tournament information, including final leaderboards, see the tournament site at: http://gao.bluegolf.com/bluegolf/gao15/event/gao1523/index.htm