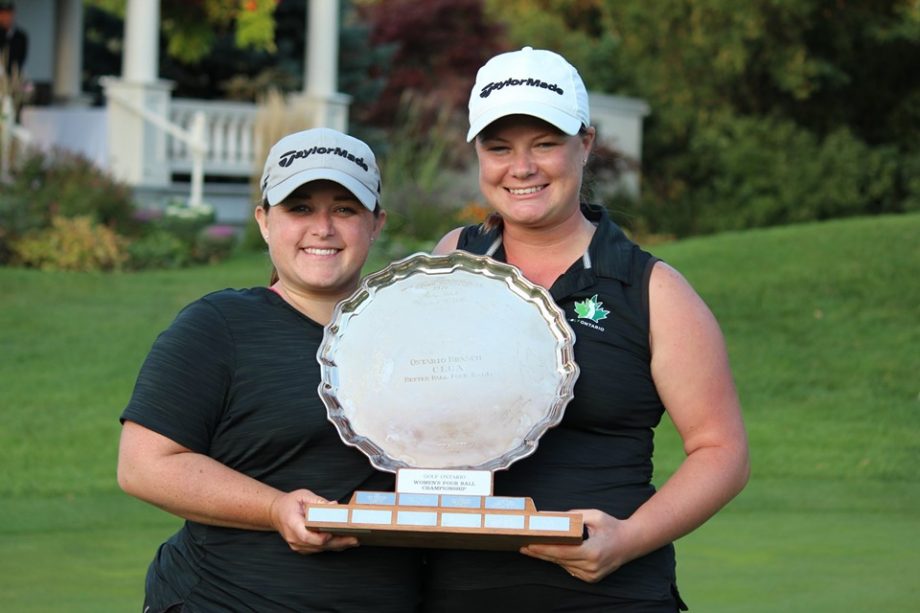 Thornhill, ON — Summer like conditions welcomed the 84 players to Toronto Ladies GC for the 66th annual Ontario Women’s Four-Ball Championship. With hot weather came hot play, and the day proved to be competitive just like years in the past. After 18 however, it was Delaney Howson (Public Player) and Team Ontario coach, and Golf Ontario’s very own, Jessie Mercer (Black Bear Ridge GC) who came out on top.

Kicking things off on the first tee, the duo of Howson and Mercer were hot from the get-go. Going even-par after nine, the duo ramped things up even more with three straight birdies on their back nine to solidify the win. Leading the trailing duo’s in second by three strokes, Mercer and Howson’s impressive showing was one that was hard to match.

“It was a great day for us,” said Howson. “We got off to a bit of a slow start but found some momentum on the back nine. We started to play off each others strengths and found a good rhythm.” When asked about their stretch of birdies in the second half of their round, they credited it to some lucky shots.

“I chipped in on 12, Delaney stuck one tight on the next and then made a six-footer on 14 to cap it off,” said Mercer. “It was a little lucky but we definitely we’re on a roll.”

The duo finished the tournament -3 (69), and left as champions.

Trailing in second was a two way tie between the group of Kristy McLaughlin (Mad River), and Joanne River (Weston G&CC), and the group of Susan Postian (Sunningdale C) and Jane Hedges-McKinnon. The two teams finished the day at even-par (72), only three strokes behind the leaders, and although they couldn’t make up the distance for the top spot, they all showcased some sizzling play down the stretch to lock the second place position.

As for the Low Net portion of the tournament, it was home course favourites Mavis Knight and Denise Tobin (Ladies GC of Toronto) who came out on top after a six hole playoff against the talented duo of Penny Robinson and Mary Contardi (The CC West). Playing an extra hour and a half of golf, both teams showed incredible resilience and devotion, proving that they were going to battle it out until the very end.

A big thank you to Ladies GC of Toronto for being such fantastic hosts for the tournament, and thanks to our volunteers as well for for all their hard work, making this championship possible.

For full results and more information on the tournament, please visit the official tournament page HERE