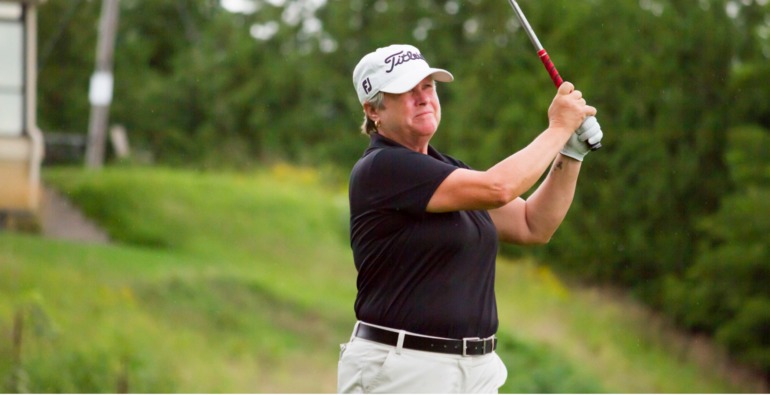 FONTHILL, Ont. – Neither wind nor rain could keep Mary Ann Hayward from taking the lead in three out of four individual divisions during the second round of the Canadian Women’s Mid-Amateur and Senior Championship at Lookout Point Country Club on Wednesday.

The Canadian Golf Hall of Fame honoured member shot the lowest score of the tournament so far with an even-par 72 to take sole possession of the lead in the Mid-Amateur, Mid-Master and Senior competitions after 36 holes.

“Yesterday played really tough. I played pretty good yesterday, didn’t putt so well but hit the ball extremely well with the wind conditions,” said the St. Thomas,Ont. product. “We lucked out with the weather today, the prediction was a lot worse than what it was. It played quite differently so I had to play different clubs after different tees and didn’t have a howling wind in our face so little tough to figure out.”

“I think everyone struggles with the putting, the greens here are a bit difficult. It’s tricky and plays with your mind a little bit playing with something you can’t see so just trusting that it’s going to do what it should do,” added Hayward. “But if it was easy, they’d call it hockey.”

Gail Pimm of Uxbridge, Ont., started off the day leading the Senior and Mid-Master divisions but carded a second-round 78 to put her in a tie for second.

“It wasn’t as consistent today but I had some bad holes but I kept with it, I toughed it out so I didn’t give up,” said the 58-year-old. “I’m still in the hunt. I’m looking forward to tomorrow and think I could do better than today for sure.”

Defending Champion Sue Wooster struggled during the first round, but three bogeys against one birdie in the second round has her sitting in second alongside Pimm in the Mid-Master, Senior and Mid-Amateur divisions.

“I hit the ball pretty solid and I drove it good all day. I just think I wasn’t in tune with the speed but I’m pretty happy,” said the Australia native. “The course has a lot of tough holes so I think if you can manage those tough holes, you’ve got some good chances on some easier holes.”

Five-time Mid-Amateur Champion Christina Proteau shares a piece of second with Wooster and Pimm in the Mid-Amateur division.

On the strength of Hayward’s lead, Ontario won their fifth consecutive inter-provincial team championship at 11 over par, a commanding 20-shot victory over second-place British Columbia. Alberta finished in third at 39 over par.