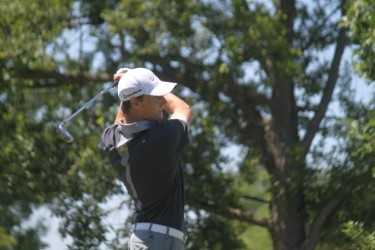 The heat warning was still in effect today but did not seem to have any impact on Robbie Latter’s game. After another beautiful day at Loyalist Country Club in Bath, Ontario, the junior boys competed to make it past the second round cut.  Latter holds onto first place with a total score of 135(68, 67), with Subdury’s Tristan Renaud (69, 72) and Niagara’s Luke DelGobbo (71, 70) trailing behind with scores of 141.

Latter seem calm and collected after wrapping up his second round with 7 under today. He said that he is confident that he can shoot even lower as long as his game remains consistent. When asked his opinion on the courses difficulty he said that, “it’s kind of hard there’s really some tough pins, anything inside 30ft [of the green] is a good shot.” However, he believes he will continue to play as well as he has for the next rounds. Although he carries the lead by 6 strokes, he shared that he will not be “laying off” his game.

As the heat wave continues tomorrow, so does the competition for the junior boys. For more on results, tee times and third round pairings check out the tournament site

The Investors Group Ontario Junior Boys’ Championship is open to male golfers 18 years of age and under, who have qualified through one of six qualifiers held across the province earlier this season. The Ontario Junior Boys’ Championship was first contested in 1923 at the Summit Golf & Country Club. Past winners of the event include Gerry Kesselring, Gary Cowan, Stu Hamilton, Mike Weir, Jon Mills and Albin Choi.