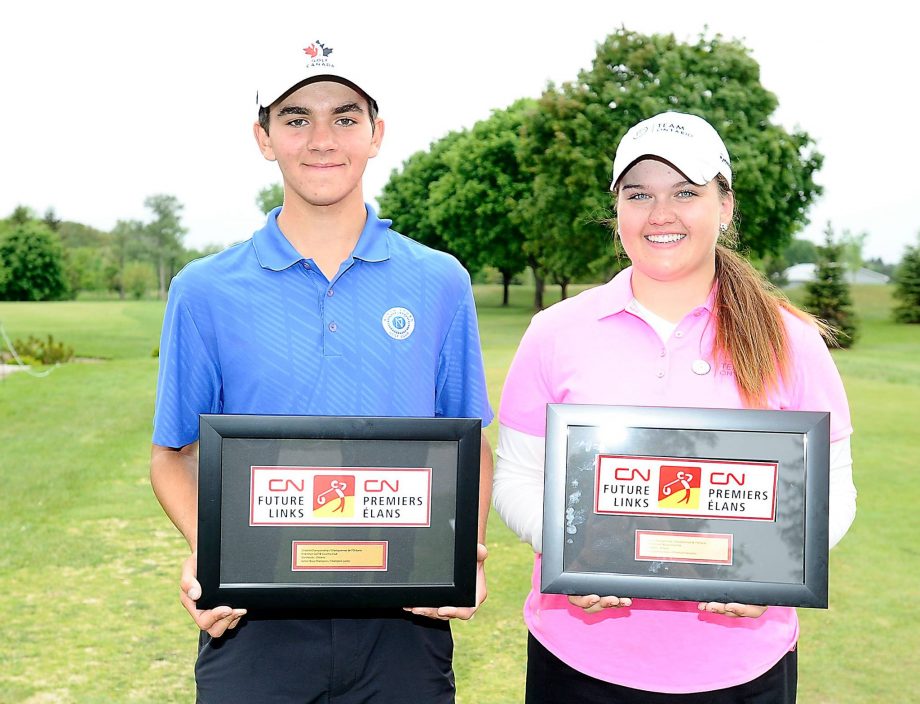 Simpson posts 68 and wins playoff against Sear; Getty finishes with round of 71

Entering the final round of play, Aurora, Ont., native Jack Simpson and Unionville, Ont., product Maxwell Sear were four shots back of leader Nicholas Brisebois of Ottawa. The two Ontarians spent the round trying to best one another, but neither could pull away. When it seemed Simpson had victory within reach, Sear birdied the final hole to send the competition to a playoff.

Jack Simpson however, would not be denied, chipping-in for eagle on the first extra hole to claim the title of 2015 CN Future Links Ontario champion. When asked about the victory, he credited a calm demeanor as the key to his success. “I knew if I just stayed patient and in the moment, birdies would fall and I would be able to post a good score,” said Simpson, who notched four birdies on the day.

Finishing in third place was Quebec City’s Charles-Eric Belanger who carded a final round of 67. Team Canada Development Squad member and Vaughan Ont., product Tony Gil shot a round of 70 to get to 1-under par for the tournament and claim solo fourth place.

National Squad teammate Étienne Papineau finished at 5-under par 66. The St-Jean-sur-Richelieu, Que., native was T5 with seven birdies on the day, including a string of three on holes 12 to 14. Rounding out the Development Squad on the Junior Boys side was Trevor Ranton of Waterloo, Ont., who posted a round of 74 to finish T12.

In the Junior Girls division, Alyssa Getty shot her lowest round of the competition – an even par 71 – to win the CN Future Links Ontario Championship by two strokes over Selena Costabile of Thornhill, Ont. The battle came down to the final hole where Getty notched her third final-round birdie to secure the victory.

“It was back and forth,” Getty said of her round with Costabile. “It was always very close between us in score and that kept it really interesting. It was a fun day of good competition.” Getty adds this year’s CN Future Links Ontario title to a 2015 resume that already includes a victory at the recent Golf Association of Ontario Junior Girls Spring Classic.

Off to a strong early season start, the Ruthven, Ont., native has high hopes for her last season of junior golf. “I want to keep playing well, and see how well I can shoot. I’m happy with my start and excited to see just how well I can play.”

Climbing up the leaderboard to a third place finish was National Team Development Squad member Grace St-Germain. The Ottawa native’s final round of 70 was her best of the tournament.

Jack Simpson and the five runners-ups from the CN Future Links Ontario Championship have earned exemptions into the 2015 Canadian Junior Boys Championship. The tournament will be contested August 3-6 at Summerlea Golf & Country Club in Vaudreuil-Dorion, Que.

The 2015 Canadian Junior Girls Championship will take place August 4-7 at Deer Park Municipal Golf Course in Yorkton, Sask. With today’s victory, Alyssa Getty and the second to sixth place finishers have earned entry into the competition. This sextet has also gained exemptions into a future Canadian Women’s Tour event.

The CN Future Links Championships are a series of six tournaments presented by Golf Canada in partnership with CN in support of golf at the junior level. Team Canada Development Squad members Trevor Ranton and Grace St-Germain were the 2015 series’ first winners, claiming victory at the Pacific edition of the competitions. The next event in the series is the CN Future Links Prairie Championship from June 11-14, hosted by Cooke Municipal Golf Course in Prince Albert, Sask.

Player scorecards and more information from the CN Future Links Ontario Championship can be found here.