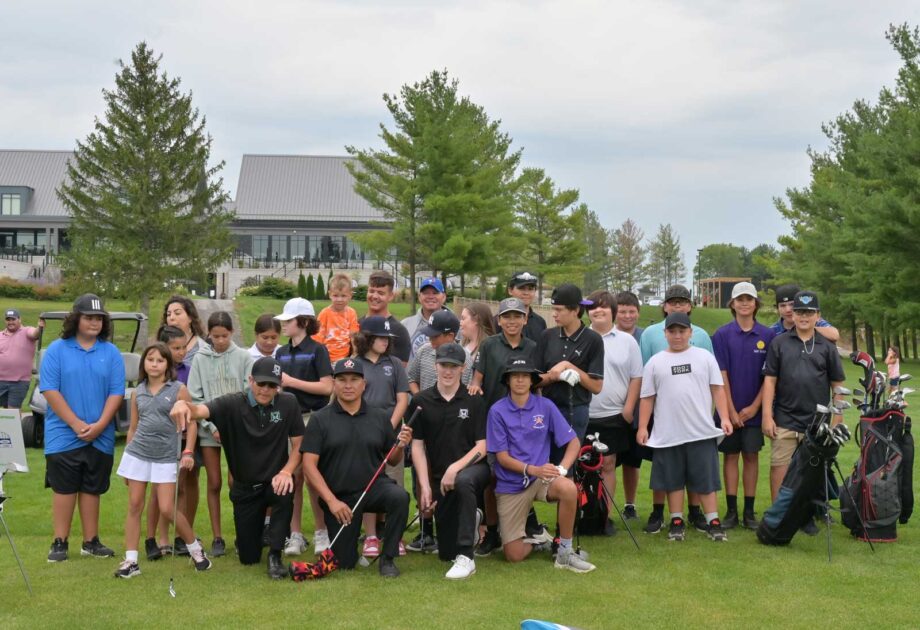 A new pathway to championship golf was officially launched tonight while the sun was slowly setting outside the beautiful Monthill Clubhouse in Caledonia, Ontario. Over 175 guests were immersed in Haudenosaunee culture and joined together to celebrate the inaugural Indigenous Ontario Golf Championship.

A collaboration only eight months in the making between Golf Ontario, Monthill Golf & Country Club and the people of the Six Nations of the Grand River Territory, the event held to formally launch this first of its kind championship did not disappoint.

Master of Ceremony Delby Powless, the Chair of the Dreamcatcher Charitable Foundation and friend to the community, welcomed all in attendance and, throughout the evening, acted as a gracious host on behalf of the local organizing committee. His first order of business was to introduce Cam Hill & Eddie Thomas, who set the stage for a traditional welcome prayer which was quickly followed by three ceremonial dances to the delight of the crowd.

Chief Mark Hill of Six Nations of the Grand was the first speaker to address dinner guests following the lively cultural dances. Chief Hill spoke passionately about the proud culture of the people of the Six Nations, one of the largest communities in Canada. He remarked how fitting it was that everyone was gathered together tonight due to Golf Ontario’s leadership and collaborative efforts, working hand in hand with the Co-Chairs of the Championship Organizing Committee, Jesse Smith and Stephen Tooshkenig, as well as a wider team at Monthill.

Following Chief Hill’s remarks, Golf Ontario CEO Mike Kelly shared his enthusiasm for the inaugural championship. Kelly expressed how the event represented yet another step toward an environment where Golf For All is not just a statement in a strategic planning document but a North Star that the organization will continue to work towards every day. As well, having been the first Provincial Sport Organization within Canadian Golf to launch a similar championship for differently-abled golfers, the Indigenous Ontario Golf Championship has already inspired at least one other Provincial association to follow suit in the coming months.

Sharing best wishes from the Premier of Ontario, Michael Tibollo, Associate Minister of Mental Health and Addictions, acknowledged the tremendous spirit of collaboration between Golf Ontario, Monthill and the local community.  Tibollo went on to say that he would take the news back to his colleagues at the legislature about how much had been accomplished through the partnership. In concluding his remarks, he further recognized that his previous experience with Golf Ontario, when in the portfolio of Tourism, Culture and Sport, was a sign of great things for this new championship and years of great advancements in this space to come.

After a delicious meal prepared by Monthill’s Head Chef, featuring locally sourced ingredients such as; buffalo mozzarella, “The New Farm” organic greens, grass-fed local beef and “Barrie Hill Farm” green beans, Smith, Monthill’s Head Pro and Director of Instruction, a Co-Chair of the organizing committee, led three local professional athletes through a Q&A about their journey from the local community to the heights of NCAA Championships and National League titles in the sport of lacrosse. While each of the three panellists is incredibly accomplished in their professional sports pursuits, they took several opportunities to share how golf has also been an important part of shaping who they are or in allowing them to find clarity of mind away from the demands of their team training, travel and competition.

It was the words shared by the panellists that, while echoing words from previous speaker Chief Hill and MC Powless, seemed to resonate most with the audience as they spoke. They spoke of gratitude for the land they live and play on, the opportunities to compete in sports, and the people who supported them in their journeys. When asked how they prepared for the rigours of competition, they all spoke about finding peace and clarity of mind, which was instilled in them from a young age. One of the players, having signed what will likely be his final professional contract, when asked what he thought life might hold for him when he does retire from professional competition, was quick to say he would be playing more golf. Here at Monthill. In the community that supports him and where he plans to instill the same shared values of his community in his two young sons, the next generation of potential leaders from within this proud Haudenosaunee community.

About the Indigenous Ontario Championship:

The Indigenous Ontario Championship will be played and hosted at MontHill Golf & Country Club, located in Six Nations, Ontario. This Championship, open to men and women of all ages, is a 36-hole competition featuring a Gross division and a Net Stableford division and recognizes the top junior and senior players: Golf Ontario has worked closely with Indigenous leaders to ensure this event provides players and spectators with a memorable provincial championship experience. The championship will bring awareness to the growth of the game of golf and the impact it could have on the communities.