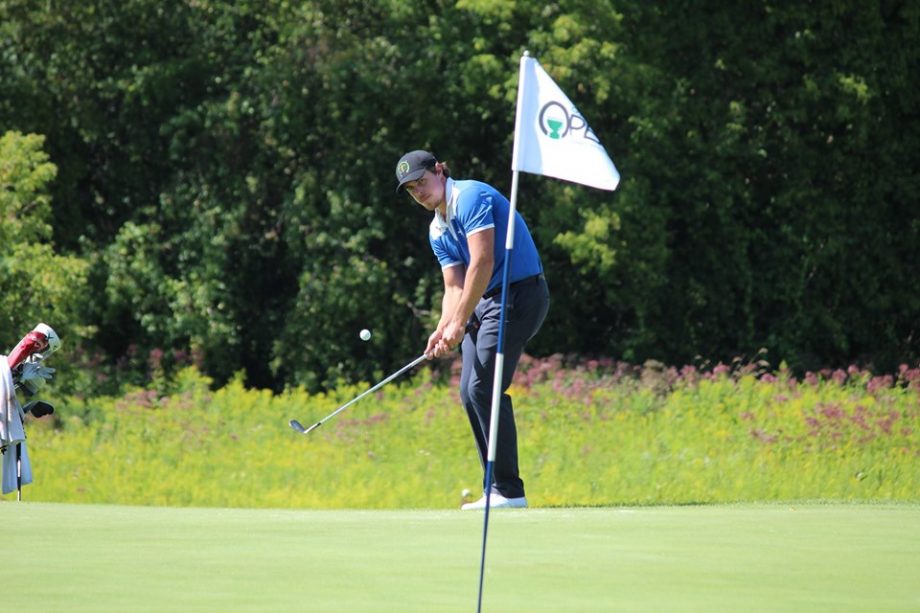 Tottenham, ON — After two days of competitive play, the third and final round of the 96th Ontario Open finally got underway. Cool and cloudy skies welcomed the players as they arrived at Woodington Lake GC in hopes of finishing the tournament strong, and leaving a champion.

Entering the day, the crowds focus was on Gregory Eason (Kissimmee, FL) as he kicked off his round with a total score of -4, six strokes ahead of the trio in second. Viewers flocked the first tee as he took to the track in pursuit of his first championship of the year. Following his momentum from yesterday, Eason maintained composure and made sure to have another solid start to his round. With a lead of six heading into today, it was clear he was playing the safe game. Finishing the front nine at even-par, the 27 year old kept to his game plan and made sure not to make any mistakes, letting the game come to him. The strategy was working, but Eason would eventually find himself with some pressure on the back nine.

Branson Ferrier (Barrie, ON) caught some heat through the later stages of his front nine. Sitting only two strokes behind Eason after 10, it looked like things we’re going to be a lot tighter than some had assumed. Eason continued the steady play however, never letting Ferrier take the lead. Fending off the surge, Eason would then retaliate with a few birdies of his own on 15 and 16, locking the top spot up for good. Heading down the 18th fairway, fans began to crowd around the green.

“It was such an amazing moment,” said Eason. “Luckily I had my caddie to calm me down, because such a crowd can cause one to get nervous. There was quite a few people about to see me finish my round, which is always delighting.” Eason would tap in the final putt to the roars from the crowd, as they cheered on the newest Ontario Open champion.

When asked about his round today and how feels now that he’s officially a champion, Eason couldn’t hide the smile on his face.

“I’m ecstatic. I haven’t won much as a pro so far, so this is huge for me. I had a few great rounds that I hope I can continue to produce in later tournaments, but at this very moment I’m just going to appreciate this while I can. This is special.” Eason would finish the tournament with a total score of -5, and a champion.

As for Ferrier, he would finish in second place with a total score of -3. Despite the impressive push during today’s round (-5 through 18), it wasn’t enough to catch up to Eason’s large lead heading into the finals. Nevertheless, that doesn’t undermine Ferriers play today. The Barrie resident showcased some spectacular talent and resilience over the course of the tournament, and will continue to find success in future tournaments with that kind of play.

Trailing behind the two leaders in third was Russell Budd (Toronto, ON) with a total score of +2. Budd also had an impressive round of -2 today to move up four places on the leaderboard for the third place medal.

As for the amateur portion of the tournament, it was Thomas Giroux (Georgetown, ON) and Sudarshan Yellamaraju (Mississauga, ON) who came out of on top with total scores of +7 after three rounds.

The Ontario Open has officially come to a close with a new champion, and with many more to come in the near future.