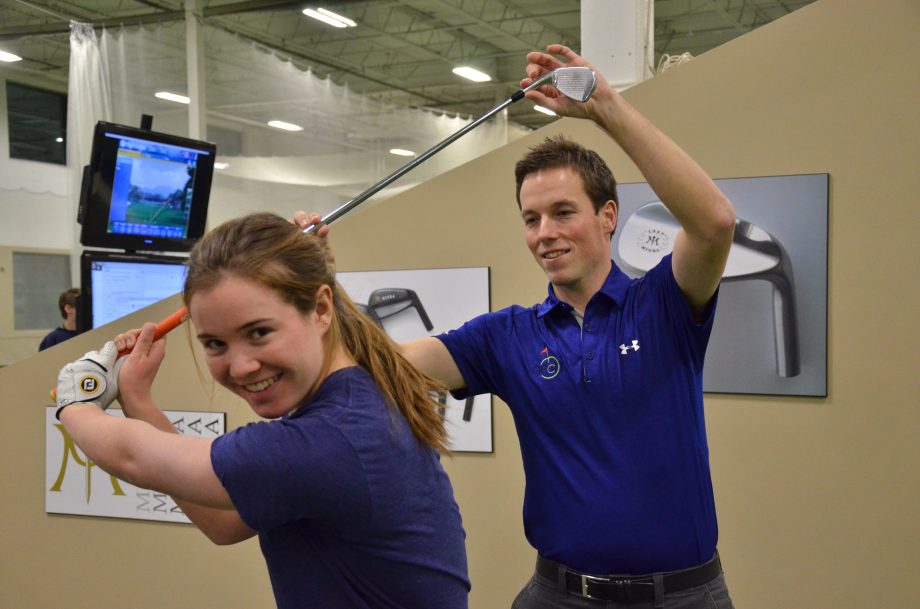 Most people wouldn’t see golf as a team sport, but maybe that’s what separates Jeff Overholt apart from the rest.

Turns out the PGA of Ontario Coach of the Year for 2013 is a real team player who believes it’s one of the key ingredients for growing the game as the sport moves forward. “Developing a team concept for junior golfers is important to keep the kids engaged in the game,” says the 31-year-old who co-owns Golf Performance Coaches which runs coaching programs at several locations such as Carrying Place & Coppinwood GC.

“You look at other major sports like hockey or soccer and players don’t practice and play in isolation, they’re part of a team, with their friends and having fun together and that is what has been missing from golf in the past. It’s a key piece to keeping them in the game and continuing to progress and improve to a higher skill level.

Over the last few years Overholt, who started his own family team when his wife Amy gave birth to their first child this past June, has been busy designing and implementing coaching programs at club, regional and provincial levels. From 2009 through 2013 Overholt was the strength and conditioning coach for the Golf Association of Ontario’s Team Ontario High Performance Program. He’s taking on new duties for 2014 and just started working with the best under-17 players as head coach of the York Regional Team, one of three feeder teams leading towards the GAO’s provincial team.

“As a coach I really enjoy the relationships I build with the athletes I work with and the time we spend together working both on and off the course,” he says. “I really try to spend time with athletes out on the golf course, watching them compete and then working with them to improve their overall game and strategies as a result of what I observed in competition.”

Over the past three years Overholt, a Class A member of the PGA of Canada for the past eight years, has been involved in the creation of the Junior Golf Development Centre (JGDC) initiative through the GAO which was adopted as a National program through Golf Canada in 2012. Extensive time was spent creating the “New Competitor” program handbook template and supporting resources, which is now available to all JGDC coaches.

As a Lead Coach for Golf Performance Coaches, Overholt and 2012 Coach of the Year, Jon Roy provide holistic junior golf coaching programs for introductory and competitive junior golfers between the ages of 10 to 18 years of age – the PGA Junior League, New Competitor Team and Developing Competitor Team. The goal of the year-round program that is offered at locations such as Coppinwood GC, Carrying Place GC, Wooden Sticks GC, The Golf Lab and the Metro Golf Dome is to deliver comprehensive support in the four pillars of performance – technical, physical, mental, and tactical – in all aspects of development for junior golfers and provide guidance to families on navigating the competitive junior golf landscape. He has also worked with the Crescent School Golf Team on player development and feels working with private schools will be one of his major opportunities for growth in the future.

He also offers a “Mid-Am” coaching program: This year-long program is designed for the competitive amateur golfer between the age of 20 to 45. This program offers a holistic approach to golf skills development for amateur golfers which have already had established careers in competitive golf and would like to continue to compete and train at a high level while working a full-time job.