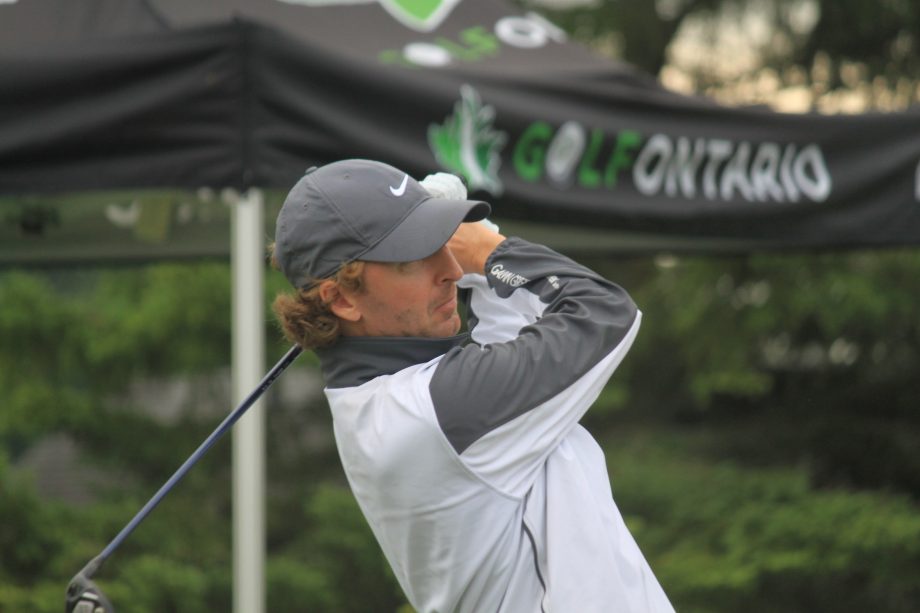 Gormley, Ont. – Competitors arriving early for the first round of the Ontario Public Amateur Championship Presented by Baka at Meadowbrook G&CC were greeted with cool and calm grey skies. While calmer, duller conditions were the backdrop for the earlier first waves of tee times, later competitors first dealt with sunnier skies and breezier play mixed in with late strong winds and a cloudier atmosphere.

With three championship flights taking to the course, golfers in the A flight (gross) and two net flights (B and C) tackled the beautiful Meadowbrook conditions. Spectacular tree lined lush fairways were paired with greens requiring accurate approach shots, providing a tough yet fair track for day one of the annual two-day tournament.

In the A Flight which is a gross competition, Gavin Smith of Orangeville closed out the first 18 holes with an even par 71 to take the lead into day 2. His two birdie back nine sees him leading by two over Joel Clark of Toronto and Kevin Holloway of Aurora who each shot respectable 73’s (+2). One stroke behind at +3 sees three players who all hope they can make moves on day two. In total 10 players sit within 4 strokes of the lead which should really ramp up play.

B Flight and the first net score competition saw both Kyle Stolys of Richmond Hill and Tony Darbyson of Brooklin atop the leaderboard with a first round -3 under. Their identical net scores of 36/32 for 68 has them sitting two shots ahead of Donald Dasti of Whitby sitting at -1. Things tighten up with a large group between even to +5 all of whom will be looking for possible Top 10 positions tomorrow.

Rounding out the leaderboard is the C Flight which again is a net competition. A strong three under on his back nine has Andrew Garron of Kingston holding a four shot lead heading into tomorrow’s final round. Sitting three shots behind at +3 was Zachary Peters of Hamilton. In at +4 are Steve Stone of Whitby and Mark Rodrigues of Milton.

For many competitors this was their first experience competing in a Golf Ontario championship while others are seasoned veterans. The Baka Public Amateur Championship provides the perfect opportunity for those interested in trying a competitive tournament while providing gross and net flights which provide similar handicap groupings. Anyone who has considered trying one of Golf Ontario’s events should look to the 2021 Baka Public Championship and consider it.

With a little more experience on the course after today, the second round promises to be an exciting and competitive conclusion to the 2020 Baka Public Championship.  Final round tee times are set for 7:30am Wednesday morning.