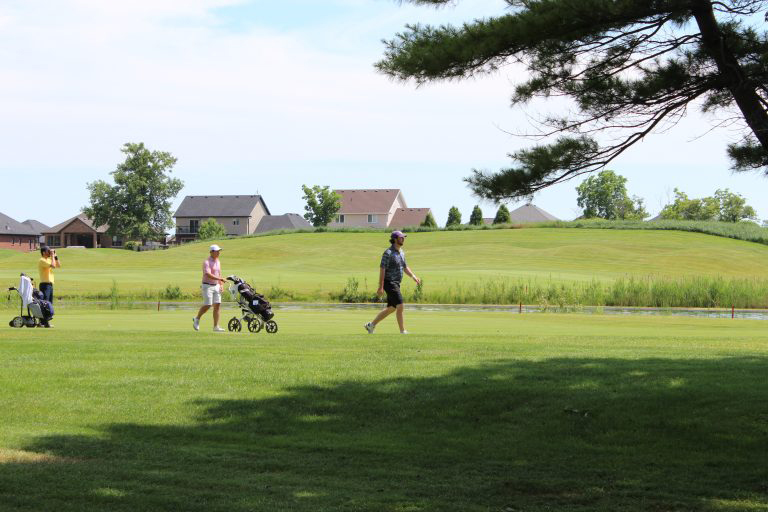 Amherstburg, ON — Much like day one, the second day of the 27th annual Men’s Mid-Am Championship was accompanied by sunny and warm weather. On June 19th, 144 players teed off at the beautiful Pointe West Golf Club for the second round of the tournament, trying to make the cut for the final day. Out of the 144 who took to the course over the first two days, only 60 (plus ties) would remain after the second round.

The day proved to be another close race, but after 36 holes it was Charles Fitzsimmons (Thornhill Club) who took the top spot going into the final day. Philip Arci (King’s Riding GC), who was the leader after day one, held the lead early on, but bogeyed three times in the second round. Fitzsimmons was able to take advantage of Arci’s lull in momentum, and held his steady play to shoot -2 on the day (-5 overall).

“My mindset has been steady the past two days,” said Fitzsimmons. “I’ve been pretty consistent with my play. I’m trying to just be consistent and not make mistakes.”

Without bogeying once the entire tournament, Fitzsimmons looks to carry his momentum into the final round. “I’m just going to continue the pace I’ve been playing at the past two days. Players will shoot what they shoot I can’t control that, but I know what I can do so I’m going to take advantage of my lead after two days and hopefully hold the lead.”

Following closely behind Fitzsimmons was John Drewery (Westmount G&CC) with a score of -4. Drewery had a good start in the round, but found himself in a setback after double bogeying the tenth. Despite the adversity however, Drewery kept his cool and played steady the rest of way, climbing back into second place.

Behind the two top scores, was a four way tie for third place. Arci, Jordan Crampton (London Hunt and CC), Dave Bunker (Brampton GC), and David Greenaway (Barrie CC) all finished with a total score of -3 after two rounds. Arci was the leader after the first day, but wasn’t able to hold the lead from the strong competition following him.

For the Mid-Master (40+) section, Drewery leads the group with a score of -4. He is trailed by Bunker by one stroke.

The third and final round will continue tomorrow with split tee tee times set to begin at 8:00am.