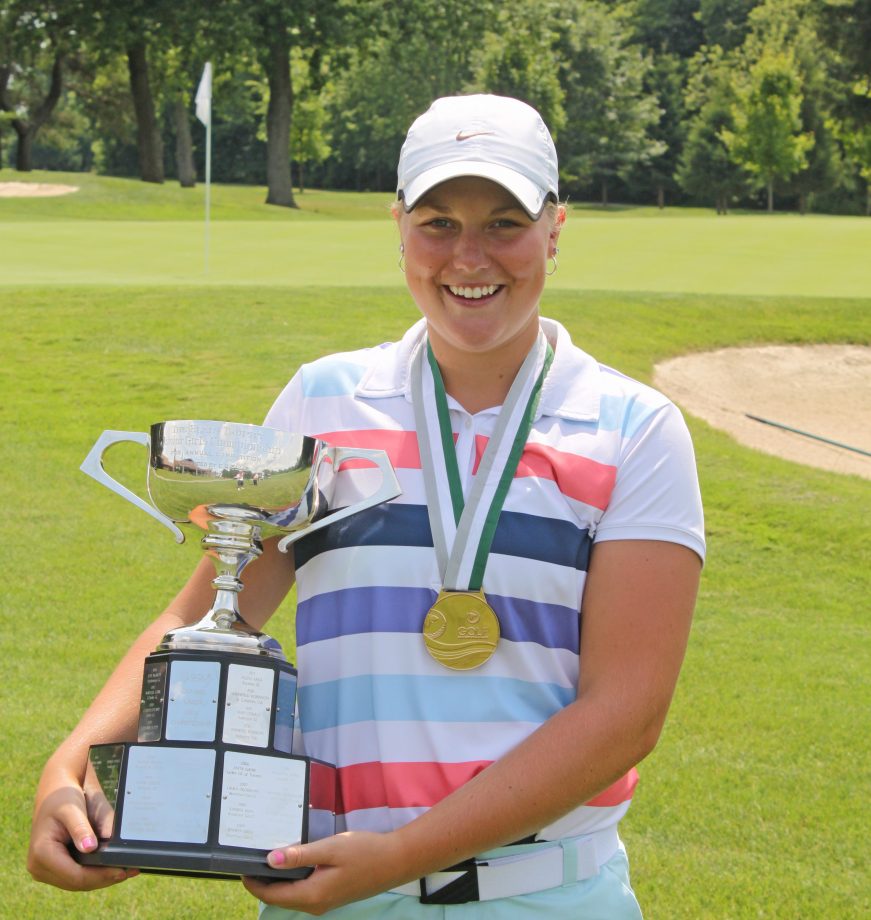 CHATHAM, ON — It was a lead that could not be overcome as Mitchell’s Courtney Tolton was able to cruise to win the Golf Association of Ontario’s (GAO) Investors Group Junior Girls’ Championship, July 18, at Maple City Country Club. Tolton entered the final round with a seven-shot lead and was never in jeopardy as she carded a one-over (73) to earn the title.

The 18-year-old Tolton, who plays for the Longwood University golf team, had an up and down start to her round with a birdie on the first hole but a double bogey on the second. After another bogey on six, she would birdie the eighth to finish the front nine one-over. One more birdie on the 12th followed by a bogey on 15 had her finishing the round one-over (73) and four-under for the tournament.

“I think I definitely did a good job keeping my shots in play,” said Tolton after the win. “I made sure to hit fairways, greens and made my two putts to get out of there and onto the next hole.”

Tolton is a former member of the GAO’s Team Ontario and had to hold off the current members (Alyssa Getty, Grace St-Germain, Monet Chun and Annika Haynes) this week. After the first round, it was Kingsville’s Getty who had the lead after a course record four-under (68). However, Getty would struggle on the final three rounds and eventually finished the final round two-over (74) and tied for second at four-over for the tournament.

Richmond Hill’s Chun entered the day in a tie for third at three-over. She jockeyed for second place with Getty and St-Germain throughout the day and had an opportunity to finish alone in the position, but a bogey on 18 brought her into a tie. She finished the round at one-over (73) and four-over for the tournament.

Starting the day in the second to last group was Ottawa’s St-Germain. After beginning the day with three bogeys on the first three holes, she settled down with birdies on eight and nine. She would finish the day one-over (73) and joined Getty and Monet as silver medalists at four-over for the tournament.

In fifth, was Oakville’s Haynes. Haynes had a consistent day and finished at even par (72), eight-over for the tournament.

Because Getty, St-Germain and Chun all tied for second they needed a playoff to determine which two would join Tolton in representing Ontario for the Inter-Provincial competition at the Canadian Junior Girls’ Championship, July 29-Aug. 1 at the Thornhill Golf and Country Club. In the playoff, Getty’s second shot went wide of the green and she would have to settle for bogey. St-Germain and Chun each two-putted for par earning the spots.

Tolton summed up her week after the win. “I feel really happy about the win especially since this is my last junior year. I started off strong and finished out well, I can’t say I would have wanted it any other way.”

As a former member of the team, Tolton said she expected this year’s Team Ontario to play well and challenge her during the tournament. “I was happy for them all, I expected that was how it was going to be, with them right in the hunt.”

Playing with the lead, Tolton knew she had to play the same game she had in the other three rounds to close out the win. “I really didn’t change my thought process. I just wanted to keep it in play and come out even or one-over, it really didn’t matter to me as long as I kept the lead.”

In the end, that is just what she did earning the 2014 title.

The Golf Association of Ontario would like to thank the volunteers, staff and members from Maple City Country Clubfor hosting the event as well as Investors Group for their continued support of amateur golf in Ontario.

The Investors Group Ontario Junior Girls’ Championship is contested annually and features Ontario’s best amateur female golfers age 18 and under. Established in 1927, the championship is being played for the 80th time this summer and 2014 marks the third time the Maple City Country Club has played host. The event has a wealth of notable past champions including World Golf Hall of Fame member Marlene Streit, Sandra Post, Sue Hilton, Alena Sharp, Jennifer Kirby and Brooke Henderson.