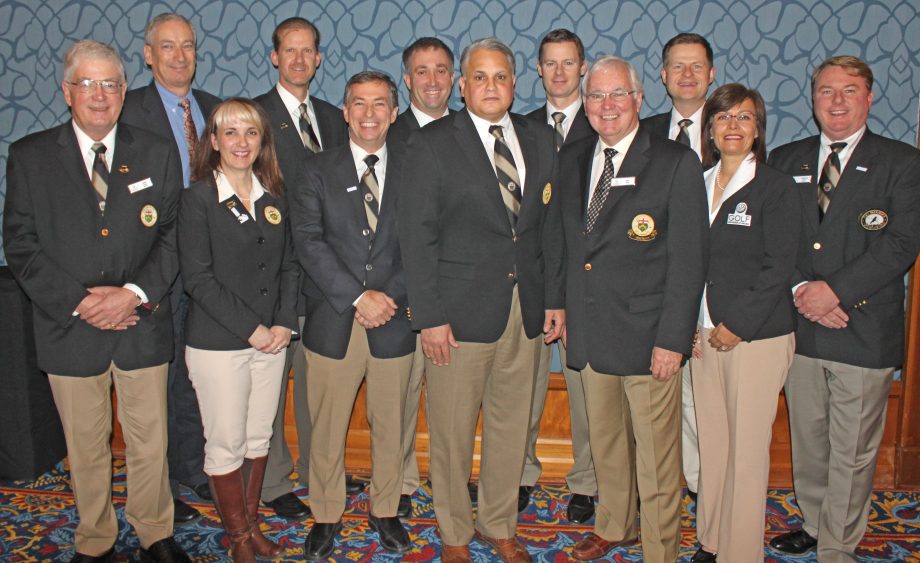 HALTON HILLS, ON – Oakville’s Christian Osborne will serve as the 2015 President of the Golf Association of Ontario (GAO). Osborne, who is a member of the Mississaugua Golf and Country Club, was named President at the GAO’s Annual General Meeting held Jan. 24, at Glencairn Golf Club in Halton Hills.

“With regards to this honour of being ‘Head Volunteer,’ as Past President Jim King often referred to the position as, it is an honour that I don’t deserve but certainly am very proud of and will work at it as hard as I can,” said Osborne.

“They say that golf is in trouble, but when we look at the portfolio of success (of Ontario golfers) that we saw this morning, how can it be?” Asked Osborne to those in attendance at the meeting. “There are challenges of course, but the game of golf that we love has survived world wars, depression, famine and recession. The challenges we face now are difficult but nothing compared to what the game faced in the past.”

Osborne went on to underline some of the challenges that the Association will tackle in 2015 and moving forward. “We are financially strong as an Association, but we can always be stronger. We need to look for new streams of revenue whether it be through funding or sponsorship.”

The relationship that the GAO has with Golf Canada was another talking point for Osborne as he emphasized how critical it will be for the two bodies to continue to work together. “We have to work with Golf Canada, they are working on a synergy program to come up with new ways for us to generate funds, to modify our membership model and to ensure we all have a future and we will support them, but not at the expense of our own identity, programs or existence.”

Osborne began volunteering with the GAO in 2011 and citied his experience with the GAO and the OGA as the reason he got involved. “I am a product of the OGA and GAO. My reason for volunteering is very self-serving because what I wanted to do was settle the score, with  an Association that gave me so much. I wouldn’t have had the opportunities in my life if it weren’t for the OGA and GAO.”

A collegiate golfer at Toledo, Osborne has also been a member at The National Golf Club of Canada before Mississaugua. He has served on the Mississaugua Board and as Club Captain. He also captured the Club Championship in 2000. Osborne is currently the Owner and Vice President of Sales and Marketing for Kleen-Flo Tumbler Industries in Toronto.

Osborne summed up how special the game of golf is to him by sharing the friendship it helped to foster. “The game of golf is like nothing I have ever seen,” explained Osborne. “It brings people together in a manner that I just haven’t seen anything else do. Jim King would be the first to admit that we come from different generations and different parts of the world, but it is amazing that this game of golf has brought us together and we found out very quickly we’re very similar and in a short amount of time, Jim King became one of my best friends in the world.”

Osborne is an invaluable asset to the Association, and the GAO is proud to welcome him as President.

The GAO would like to thank 2013/2014 President Jim King for his commitment and dedication to the role of President over the past two years. King, a resident of Waterloo, served as the GAO’s 12th President and will continue to serve on the GAO Board as Director and Past President. Filling the role of Vice President in 2015 is Kent Trainor of Toronto.

Also at the AGM, the GAO presented Past GAO President Steve James with the Honorary Life Director Award. The award recognizes those who contribute their time and hard work over an extended period of time. The recipients of this award have given unselfishly to promote amateur golf, the GAO, and has done so in a variety of ways over a number of years.

James began as a Tournament Volunteer in 1994 as a starter, scorer and Rules Official. In 2002, he joined the Board of Directors and served as Tournament Chairman. He would go on to serve on both the Finance and Nominating committees. From 2005-07, he chaired the Finance Committee.  In 2008, James acted as GAO President. Throughout his time on the broad, James has continued to volunteer as a Rules Official.