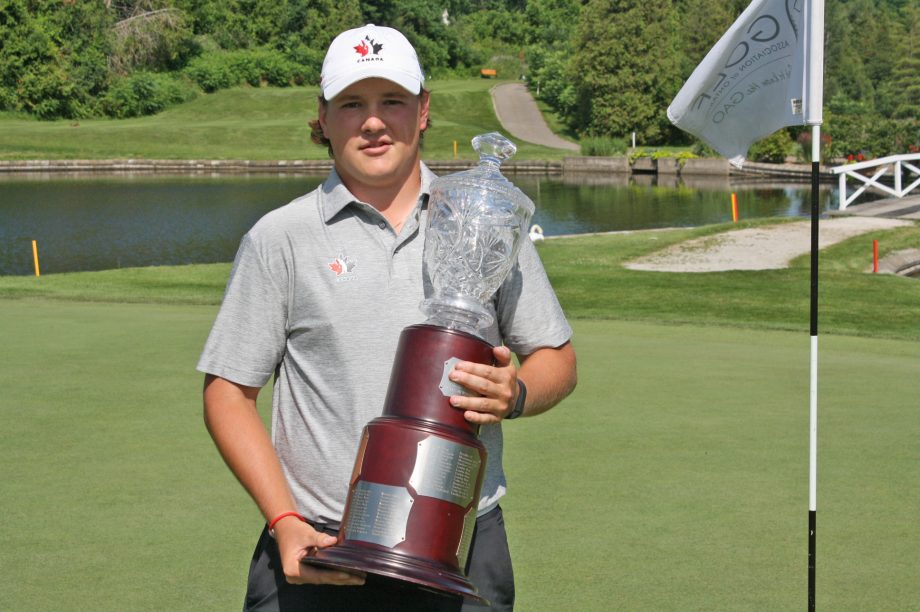 GEORGETOWN— It was a spectacular final round for Kitchener’s Chris Hemmerich at the Investors Group Ontario Men’s Amateur Championship on July 11 at the Club at North Halton. Hemmerich, the Westmount Golf & Country Club member, entered the day at five-under, two behind leaders and Team Canada teammates, Listowel’s Corey Conners and Richmond Hill’s Taylor Pendrith. However, Hemmerich would shoot eight-under (63) for the final round and held on for a one-shot win over both Conners and Pendrith.

The 21-year-old Hemmerich lite up the course from the beginning of the round. He opened the day with birdies on the first two holes to earn a share of the lead. After birdies on five, seven and nine, Hemmerich sat five-under for the day at the turn. He didn’t let up on the back nine as he drained birdies on 10, 11 and 13 to drop to 13-under for the tournament. From there he pared the final five holes to enter the clubhouse with the lead, a tournament total of 271.

That put the pressure on Conners and Pendrith. Conners, the Listowel Golf Club member, was able to drop to eight-under after a birdie on the second hole. He added two more birdies on the front nine and sat at 10-under at the turn. As for Pendrith, who plays his golf at The Summit Golf & Country Club, he drained a birdie on the third before an eagle on the par-five seventh. He finished the front with another birdie on the ninth and was at 11-under.

Despite beginning the back nine with a pair of birdies on the 10th and 11th holes, Pendrith would go on to bogey 15 and 16 and finished the round five-under (66), 12-under for the tournament.

Conners got a couple stroke back on the 10th and 15th holes with a pair of birdies but couldn’t find one more on the final three and finished the day five-under (66), 12-under for the tournament, resulting in Hemmerich taking the title.

“This really feels awesome!” Said Hemmerich after the round. “I had a great support staff with me here this week, from the national team staff to family and friends who all came out to watch. It really couldn’t have been drawn up any better.”

One of the things Hemmerich was able to do well during his final round was rebound from sub-par shots. He talked about how he approached those situations. “In years past, I have hit a lot of very bad shots so I know they are going to happen and when they do you just need to laugh about it. That is really how I approach golf.”

Hemmerich gave full credit to the other members of Team Canada who will join him in representing the province at the inter-provincial event at the Canadian Amateur, Aug. 4-7 at Elmhurst Golf & Country Club and Southwood Golf & Country Club in Winnipeg. “Every tournament we have entered as a team, at least one of us has been up near the top of the leaderboard, which just shows how strong it is. It is kind of weird when you are seven-under for the day and still not leading. That just shows how good those boys are.”

For full final round scores and information on the tournament, visit the tournament page at: http://gao.bluegolf.com/bluegolf/gao14/event/gao1413/index.htm