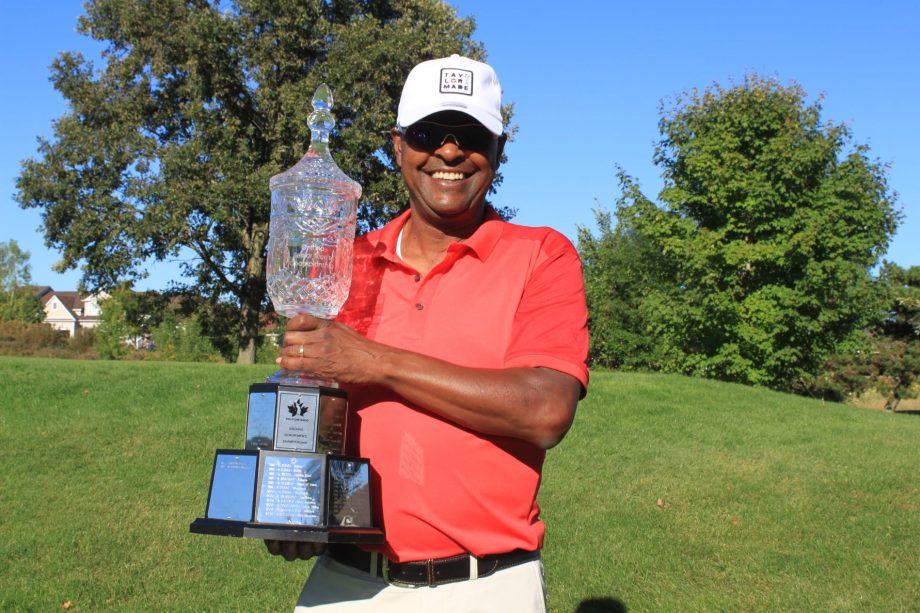 Bath, ON – Early heavy fog delayed a dramatic final round of the Ontario Senior Men’s Championship, from Loyalist Golf & Country Club. An hour delay exactly, saw the men start at 9:00 am before being able to tackle the challenging course on their quest for gold. That quest came down to a 10-foot birdie putt on the 18th hole to decide our champion.

Ashley Chinner (Coppinwood) fought back from a four-stroke deficit, behind 2020 Champion Dave Bunker (Cherry Hill Club), to drain his birdie putt on 18 and claim the prestigious title. Chinner recorded a strong three-under (69) to catch and surpass Bunker, who along with third place finisher Robert Cowan (Westmount G&CC), shot a two-over (74). He gained momentum on the back nine with three birdies over his last seven holes.

Following a silver medalist finish in 2020, Chinner said it “feels really good” to win a championship. “It’s been a while since I’ve won anything, so this really means a lot. I’m very happy.”  Chinner spoke about silver medallist Bunker, adding “I so enjoy playing with Dave. He’s such a great golfer and is never out of it. He has one of the best short games I’ve ever seen”. On his own game he explained “I tried to give myself birdie opportunities and they came at clutch moments. I started to hit the ball good on the last six holes after a nice three wood on 12.

As well as crowning the Ontario Senior Men’s Champion, we also saw hardware handed out for the age 65 and over category, and age 70+ divisions. Ronald James White (St. George’s &CC) captured the 65 and over division, while Kerry Short (Cherry Hill Club) won the 70 and over division.

Golf Ontario would like to thank the players, starters, referees, scorers, and volunteers for their support of the 2021 Ontario Senior Men’s Championship. Thank you as well to Loyalist G&CC and your staff, volunteers, and members for being such outstanding hosts and supporting this historic event.