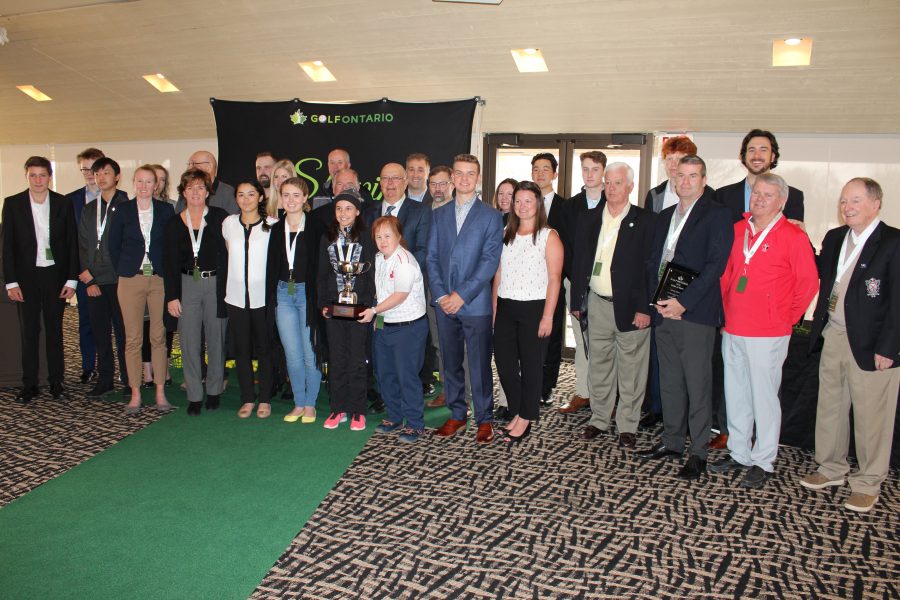 OAKVILLE — Golf Ontario again celebrated and recognized those who have been honoured in the golf industry in this past year. Celebrate Golf in Ontario, Golf Ontario’s annual award ceremony, took place on Sunday March 31, 2019 from 12:30 pm to 2:30 pm at Glen Abbey Golf Club. This prestigious awards ceremony marked the kick-off for Golf Ontario’s 2019 Conference and Annual Meeting, with many great speakers and the Annual Meeting scheduled to occur the following day, Monday April 1, 2019 at Glen Abbey Golf Club as well. The Celebrate Golf in Ontario awards ceremony was a chance to look back on 2018 and recognize some of the best and brightest in the golf industry.

The Celebrate Golf in Ontario awards ceremony was hosted by Kara Wagland. Wagland, a Cambridge, Ontario native is a well known and highly respected anchor and reporter for TSN SPORTSCENTRE, Canada’s most watched sports new and information show. In 2014, Wagland hosted Wimbledon Primetime on TSN after beginning her career as a story editor in the SPORTSCENTRE newsroom.

Celebrate Golf in Ontario featured a reception and awards ceremony to recognize and celebrate those who have been honoured in the golf industry in the past year. Categories of award winners include PGA of Canada zone awards, IAGA distinguished service award, Golf Ontario volunteer awards, and the 2018 Golf Ontario Order of Merit winners.

Mike Kelly, Executive Director of Golf Ontario, expressed his pride in putting on this reception and ceremony to honour the winners. “Celebrate Golf in Ontario was a great chance for Golf Ontario to recognize some truly great accomplishments in golf in 2018. Between industry award winners, and some amazing Championship performances, we were honoured to be recognizing some of the best and brightest in Ontario golf with 2018 awards. With Kara Wagland as host, and a distinguished list of nominees and winners, Celebrate Golf in Ontario was a great event for attendees and winners alike”, said Kelly

Szeryk, a 17-year old Team Canada development squad rookie, also had a sensational 2018 season. The future Texas A&M star was 1st in both the Ontario Women’s Mid-Amateur and the Ontario Women’s Amateur Championships. Szeryk made it to Round 4 of the Women’s Western Amateur, and the Round of 16 for the Girls British Open Amateur.

Other Winners that were recognized and celebrated were as follows:

Photos from the day can be found here