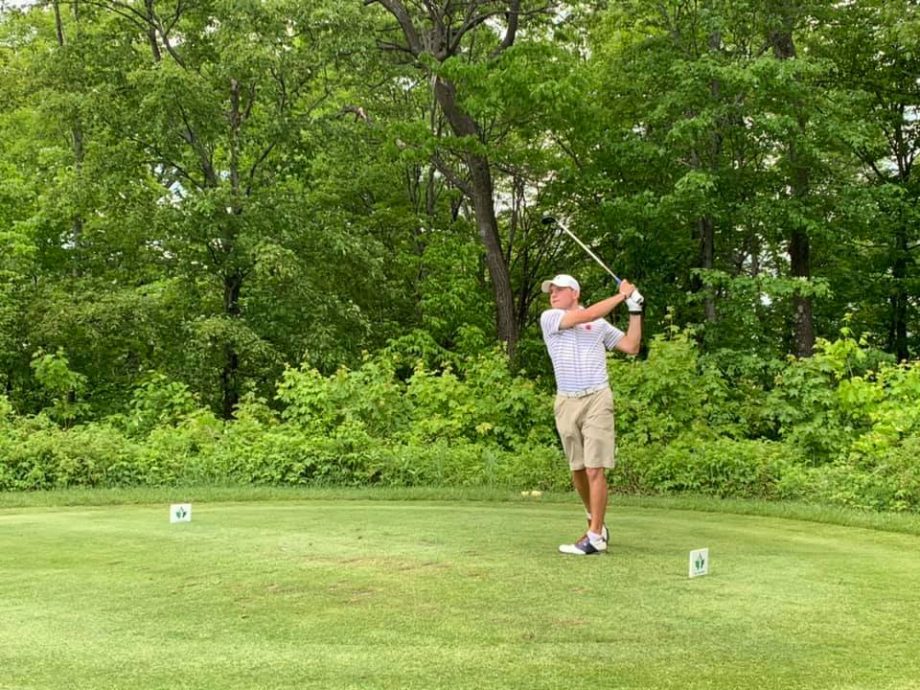 Port Carling, ON — It was a warm and sunny day at The Lake Joseph Golf Club for day three of the Men’s Match Play which would consist of both the quarter and semi finals.

Eight players took to the course for the quarter finals, knowing only four would remain after 18 holes.The round was extremely competitive, as every player was hitting from all cylinders. After 18 strong holes and a few tough battles, it was Team Ontario member Ty Celone, Peyton Callens (Delhi G&CC), Matthew Anderson (Credit Valley G&CC), and Aidan Gavey (Beverley G&CC) who came out victorious.

Gavey pulled off a huge win on one of the quarters, as he knocked out the reigning champion, Cameron Kellett. The two were neck and neck the entire round, but Gavey had the last laugh when he clinched the fourth spot in the semi’s by a single putt on the 18th hole.

The semi finals kicked off later in the day at 1:10pm with Callens and Celone both hitting deep drives off the first tee. The two were followed shortly by Anderson and Gavey who as well hit impressive shots onto the fairway. The first four shots set the tone for the rest of the round, as all four players didn’t let up through the entire 18 holes.

Battling back and forth for control of the lead, it was Callens who pulled ahead in the first pairing. The two were up and down one for the first ten holes, with Celone taking the lead early on the first hole, only for Callens to tie it back up on the fourth. By the eight hole, Callens was able to take advantage of Celone’s bogey, and stole the lead. Once Callens took the lead, there was no turning back. He kept a steady form, hitting two birdies on the back nine, and pulling away from the talented Celone.

“It was a tough day, playing both Bunker and Celone,” said Callens. “I just had to be consistent, and make sure to not bogey on any.” Callens also mentioned that he had no nerves coming into today.

“I’ve been playing against Celone for years now, so i wasn’t too nervous going into today. I’m going to be going into the finals with that same attitude.”

In the second round, it was Gavey who beat the odds to move on to the finals on Thursday. Their round started with a quick lead by Anderson after the first hole, only for Gavey to tie things back up on the second. For the next three holes the pair sat at even, until Andrew bogeyed the fifth and Gavey reclaimed the lead. For a moment it looked like Anderson was going to climb back to even things up, but Gavey held his ground and never let Anderson recover. He hit no worse than par through the last thirteen holes, never giving Anderson the chance to take over.

“I just took the day one shot at a time and let the rest fall into place,” said Gavey. “I hope to keep that same mindset going into tomorrow.”

Callens and Gavey will continue onto day four for the finals, with the winner being crowned the 2019 Ontario Men’s Match Play Champion. Tee time is set for 8:00am.