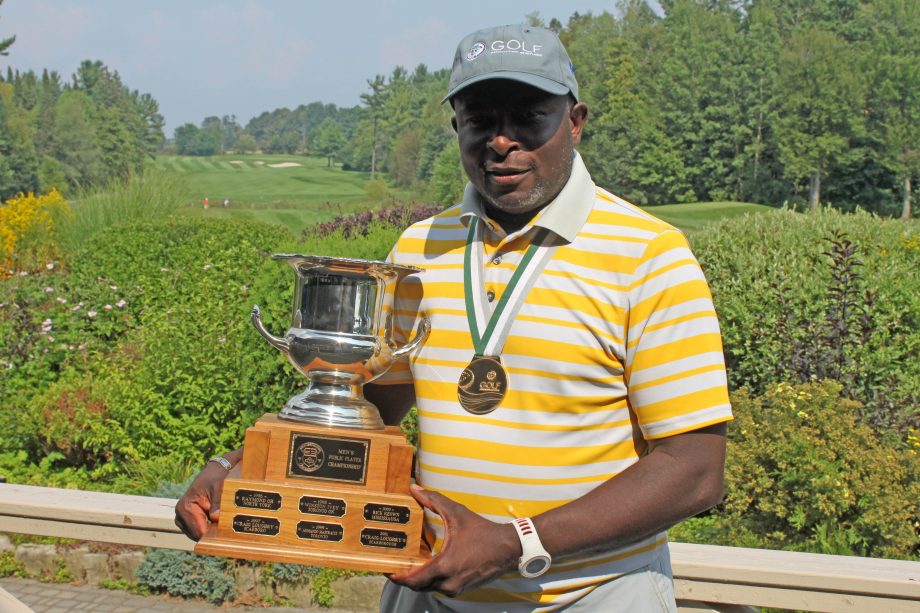 INNISFIL— The Golf Association of Ontario’s (GAO) Baka Wireless Public Player Championship concluded on Sept. 2, at National Pines Golf Club in Innisfil. When all of the scores were in, it was 2011 champion, Arnold Johnson, who hoisted the trophy for a second time.

This year, the championship was divided into three categories: the A Flight, for the overall gross championship, and two net flights, B and C. Players were placed into one of the three flights based on their handicap ratings heading into the event.

Johnson, from Brampton, began the day at four-over, five shots back of leader Jean-Henri Lavoie, also from Brampton. The 47-year-old Johnson started the day in the fifth from last group. He had a tough start and was two-over at the turn. However, he would settle down on the back nine and thanks to birdies on the 15th and 18th holes, he finished the day even. That brought his tournament total to four-over (76-72), good enough for the win.

“This wasn’t expected at all, I just came out and played the golf course,” said Johnson. “I have won this before, but today was special because I have been suffering from a wrist ailment this season. I just had it fixed three weeks ago, so this was a comeback and it was quite a joy to play well and win.”

Johnson went on to talk about what went well and what his frame of mind was during the final round. “I was finally able to make some putts. Yesterday the greens were a bit slower but today I was able to live with them. The good putting definitely helped. I figured I needed to be two or three under to have a chance. I just wanted to keep it close, I didn’t think 72 would do it but it did.”

Capturing the silver medal was Oshawa’s Jay Finley. Finley finished the day four-over (76) to go along with his opening round of one-over (73), which was good enough to grab second by just one stroke at five-over for the tournament.

In the Net B Flight, it was Oakville’s David Everest who came away with the title. Everest had an opening-round net score of one-under (71) and followed it up with a three-under (69) second round to win the flight by a stroke at four-under.

Taking the Net C Flight was Toronto’s John Baty. Baty had an opening round net score of four-under (68), but outdid himself on the second day finishing with a net 13-under (59) to win the title at 17-under for the tournament.

For complete tournament information, including the final leaderboards, see the tournament site at: http://gao.bluegolf.com/bluegolf/gao15/event/gao1587/index.htm

The GAO would like to thank the staff and volunteers at National Pines Golf Club for their help in running the event. Thanks also to title sponsor Baka Wireless and the GAO volunteers for their continued support of golf in the province.

The Baka Wireless Public Player Championship has been contested since 1958. It was suspended between 1984 and 1995. This year’s event is a two-round competition with a gross championship and two net flights. Former champions include: Ontario Golf Hall of Famer Gerry Kesselring, Ken Trowbridge, Dave Bunker and Lucas Kim. Craig Loughry holds the record for the most victories with four.