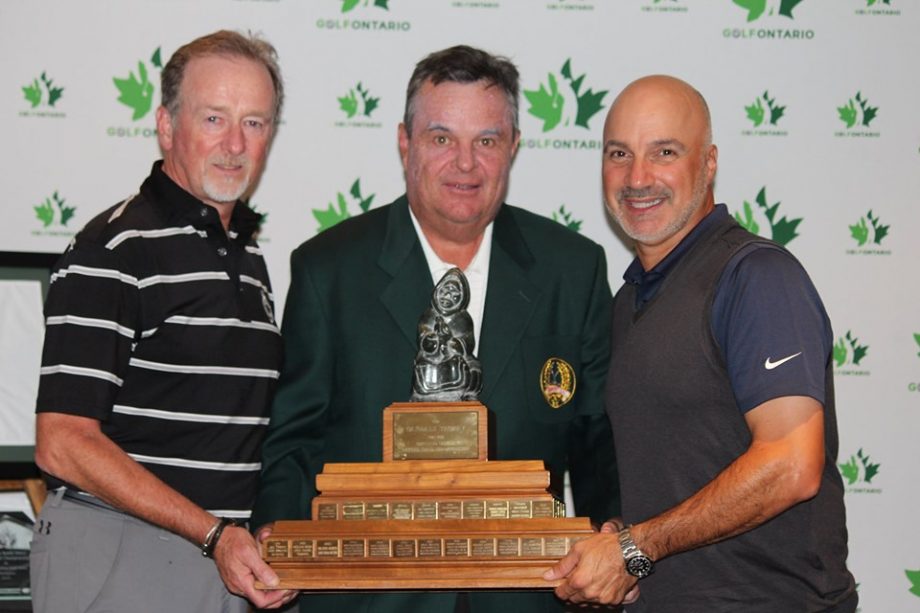 Brampton, ON — Warm and sunny skies welcomed the golfers to the one day Ontario Senior Men’s Better-Ball Championship at Brampton GC. The field of 124 went off at a 1:00pm shotgun start to see which duo would leave a champion, and hoist the ‘Oakdale Trophy’. Being the only round of the tournament, the stakes were high and the players came out ready to play.

At the beginning of the day, all eyes were on the reigning champions Mark Bennett (Bayview G&CC) and Jim Briggs (Cardinal Lakes GC). The duo came into the tournament the early favorites as they arrived with high hopes of clinching their second title in two years.

The tournament was highly competitive seeing five groups all within two strokes of the top spot, but it was home course twosome Bruno Ardito and Gary Parker (Brampton GC) who would eventually steal the show. After 18, the duo was tied with the talented team of Dan Partland (The Summit G&CC) and Christopher Kertsos (York Downs G&CC). The two teams took to the track for a playoff hole to decide who would leave a champion. Neck and neck the entire way through, it seemed like neither duo could pull ahead. It wasn’t until the third playoff hole where Ardito lined up and dropped a 30-foot putt to clinch the title.

When given the chance to speak about the tournament winning shot, Ardito simply praised his partner. “If it weren’t for my red hot partner, this wouldn’t have been possible,” he said. “It’s a great feeling winning at our home course, and we hope everyone had as much fun as we did.”

Ardito and Parker would finish the tournament with a final score of -5 (66), and take home the heavy hardware. Kertsos and Partland finished the tournament in second, trailed closely by two teams tied for third. Both duo’s of Phil Charal and Tony Robinson (The Summit G&CC), and Greg Hothman David Greenaway (Barrie CC), finished the tournament only a single stroke behind the leaders at -4 (67). The two teams had impressive showings, almost causing a four way playoff for the rights to being a champion.

Golf Ontario would like to thank Brampton GC for hosting the event, and providing spectacular food and beverage to all the players. Also a big thanks to our volunteers for making this event possible.